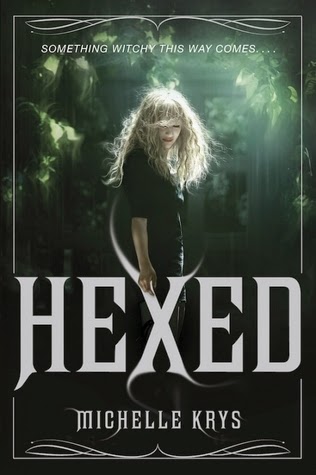 If high school is all about social status, Indigo Blackwood has it made. Sure, her quirky mom owns an occult shop, and a nerd just won’t stop trying to be her friend, but Indie is a popular cheerleader with a football-star boyfriend and a social circle powerful enough to ruin everyone at school. Who wouldn’t want to be her?
Then a guy dies right before her eyes. And the dusty old family Bible her mom is freakishly possessive of is stolen. But it’s when a frustratingly sexy stranger named Bishop enters Indie’s world that she learns her destiny involves a lot more than pom-poms and parties. If she doesn’t get the Bible back, every witch on the planet will die. And that’s seriously bad news for Indie, because according to Bishop, she’s a witch too.
Suddenly forced into a centuries-old war between witches and sorcerers, Indie’s about to uncover the many dark truths about her life—and a future unlike any she ever imagined on top of the cheer pyramid.

My thoughts
Witches will forever and always be my most favorite of the supernatural. (I know that my favorite series happens to be about vampires, but overall it's witches that I love.) I think it's because they are the most relate-able to humans. I mean face it they're humans with magic. An old friend and I even had a never-ending story going about witches and fairies. Can you guess which I was?

With that being said, I wasn't sure if I would enjoy Hexed or not. Hexed is just one among millions of witch books out there, and you have to have something pretty amazing to catch my attention.

The beginning was a bit slow, but as the story progressed it picked up the pace. Things started to happen, and Indie began to learn who she was. (Being popular is not always what it looks to be) There were things that happened to her throughout the book that kept putting her in tough situations, but I believe she came out on top as best she could. -insert boy here-

What is it with these boys named Bishop that have this alluring factor to them. (See-The Book of Ivy) I'll admit at times I thought Bishop was an ass, but in time he became an ass that I liked. (personality wise people)

Paige is the kind of friend you always hope you'll have growing up, and then well on in to adult hood. Sure Indie treated her like a lepper for so many years, and then when Indie's life begin to crumble who was it she went to for help? Paige. She stood by Indie. I loved watching the friendship grow.

There were more characters throughout the story Jezebel (a hot with friend of Bishops), The Priory (Sorcerers set on killing witches), The Family (The Witches Coven basically), Aunt Penny (Indies wild Aunt), Leo (Bad guy), and more. I believe will see them a bit more in Charmed. Well at least some of them.

So with the pace and characters out of the way...
There was one main part in the book that had me grasping my seat and gasping for air. I literally had an intake of air when Indi's mom died. My hubby looked over at me, and was like are you okay. Probably wasn't a good idea while he was driving. (My poor husband and what he deals with when I'm reading. I love him so much.)