Waiting on Wed: Our Lady of the Ice by Cassandra Rose Clarke 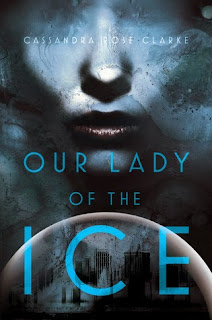 Author: Cassandra Rose Clarke
Hardcover, 343 pages
Expected publication: October 27th 2015 by Saga Press
Hope City, Antarctica. The southernmost city in the world, with only a glass dome and a faltering infrastructure to protect its citizens from the freezing, ceaseless winds of the Antarctic wilderness. Within this bell jar four people–some human, some not–will shape the future of the city forever:Eliana Gomez, a female PI looking for a way to the mainland.Diego Amitrano, the right-hand man to the gangster who controls the city’s food come winter.Marianella Luna, an aristocrat with a dangerous secret.Sofia, an android who has begun to evolve.But the city is evolving too, and in the heart of the perilous Antarctic winter, factions will clash, dreams will shatter, and that frozen metropolis just might boil over…
Why I'm waiting on this?
It sounds a bit different with the 4 Main characters (I'm assuming). The cover is also a bit mysterious looking.