Blog Tour and Interview: The Dead Girls of Hysteria Hall by Katie Alender 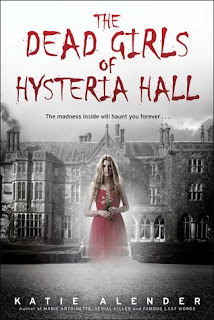 Synopsis:
Asylum meets Miss Peregrine's Home for Peculiar Children, in this riveting tale of ghosts, secrets, and family, from master of suspense Katie Alender. Delia's new house isn't just a house. It used to be an insane asylum, a place to lock up "troubled" young women long ago. And a restless, wicked spirit is still at play--and it doesn't want defiant girls like Delia to go anywhere. So the house kills her. Now Delia is a ghost, trapped in her creepy home forever. As she meets the other ghost girls who haunt the narrow hallways, as well as the handsome ghost boy on the grounds, she learns shocking truths about the house's history. Delia also realizes that her alive and grieving sister might be the house's next target. Can Delia unlock the mystery of the old asylum, save her sister, and free herself?

Kirkus (starred review): "This superior ghost story keeps the creep factor high… A really scary and original ghost story, well told. Read it with the lights on."   School Library Journal: "Alender has created a chilling tale of forgotten tragedies and family secrets. A great choice for fans of horror or
suspense novels."

1. You seem to write a lot about ghosts. Do you believe in ghosts and have you ever had an experience you can't explain?
I don’t necessarily believe in ghosts, but I can’t count them out, as I know numerous people who are confident that they exist. Who am I to say they don’t? I did have one experience that I can’t explain — a night I could have sworn I heard my husband come home and sit down to watch TV, but when I went upstairs there was nobody home. We had just bought a pair of lounge chairs from an estate sale at the home of a writer who had passed away, so I sometimes say that his ghost followed the trail of writing energy (and chairs) to have a little walk around my living room.

2. Out of all your books which was your favorite to write and which did you have a harder time on?
Oh, man. They’re all hard! They all hit a certain point where you think, “Okay, this is the one I’m not going to be able to do. This is the book that will ruin me.” But the process being so scheduled is enormously helpful in terms of pushing you past those thoughts and back to work. I think the one I enjoyed writing the most was probably the second Bad Girls Don’t Die book, From Bad to Cursed. Because I understood the characters’ journeys so much, and I was fascinated by the things they were doing under the influence of a not-so-nice spirit.

3. If you could have been the original author of any book, what would it have been and why?
I don’t actually want to have written anyone else’s book, but I’ll say Harry Potter because then I would have a castle and a theme park.

4. If you were to write a book about yourself, what would you name it?
Probably “Honestly.” I feel myself saying that a lot. I used to think that if I ever wrote a memoir about my childhood, it would be called “Alligator Dreaming,” because I grew up in South Florida, where there are alligators. And for many years I would have random dreams about alligators. 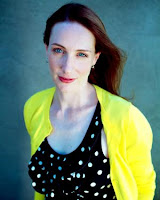 About Katie: Katie Alender is the author of The Dead Girls of Hysteria Hall, Famous Last Words, Marie Antoinette: Serial Killer, and the Bad Girls Don’t Die series. She is a graduate of the Florida State University Film School and lives in Los Angeles with her husband, daughter, and two dogs. When she’s not writing novels, she can usually be found quilting, reading, eating delicious high-calorie foods, and hanging out with her friends (on very special occasions, she manages to do all of those things at once).
Find Katie on the web:  |Website|Twitter|Facebook|Instagram|Tumblr|Wattpad

Giveaway Details: 3 winners will receive a finished copy of THE DEAD GIRLS OF HYSTERIA HALL. US Only.