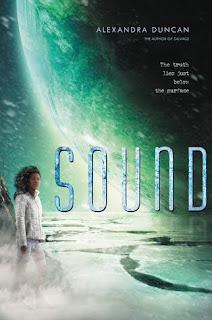 Title & Series: SOUND (Salvage #2)
Author: Alexandra Duncan
Release date: September 22, 2015
Publisher: Greenwillow Books
Pages: 496
Formats: Hardcover, eBook
Links: AMAZON | BARNES & NOBLE | iTUNES | THE BOOK DEPOSITORY | INDIEBOUND | GOODREADS
Synopsis:
SOUND is the stand-alone companion to Alexandra Duncan’s acclaimed novel Salvage, a debut that internationally bestselling author Stephanie Perkins called “kick-ass, brilliant, feminist science fiction.” For fans of Beth Revis, Firefly, and Battlestar Galactica. As a child, Ava’s adopted sister Miyole watched her mother take to the stars, piloting her own ship from Earth to space making deliveries. Now a teen herself, Miyole is finally living her dream as a research assistant on her very first space voyage. If she plays her cards right, she could even be given permission to conduct her own research and experiments in her own habitat lab on the flight home. But when her ship saves a rover that has been viciously attacked by looters and kidnappers, Miyole—along with a rescued rover girl named Cassia—embarks on a mission to rescue Cassia’s abducted brother, and that changes the course of Miyole’s life forever.

Miyole has made her whole life about being a scientist on a mission. Now that she's been on it things are changing. When her ship is attacked by what I will call space pirates people get hurt, kidnapped, and she let's one slip away from  her. When she's faced with guilt about the kidnapping she makes it her mission to help Cassia find her brother. We can all guess where this is going to lead. Get ready for a space-riffic adventure with space pirates, space mobsters, a sweet love interest (no triangle!) and a furry feline named Tibbets.  If you're looking for a fun filled adventure in space this is definitely for you.  Sometimes breaking the rules and doing what you believe in has an affect you didn't think possible. :)

About Alexandra Duncan Alexandra Duncan is a writer and librarian. Her first novel, Salvage, was published April 1, 2014, by Greenwillow Books. Her short fiction has appeared in several Year's Best Science Fiction & Fantasy anthologies and The Magazine of Fantasy and Science Fiction. She loves anything that gets her hands dirty – pie-baking, leatherworking, gardening, drawing, and rolling sushi. She lives with her husband and two monstrous, furry cats in the mountains of Western North Carolina.


Giveaway Details: 1 winner will receive a signed hardback of SOUND, a signed paperback of SALVAGE, and this electronic butterfly in a jar. US Only
a Rafflecopter giveaway