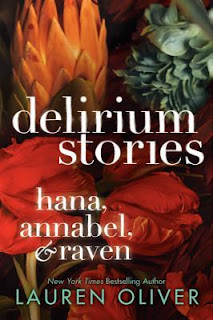 Author: Lauren Oliver
Publisher: HarperCollins
Pages: 208
Series/Standalone: Series Novellas (Delirium 0.5, 1.5, 2.5)
Synopsis:
Hana is told through the perspective of Lena's best friend, Hana Tate. Set during the tumultuous summer before Lena and Hana are supposed to be cured, this story is a poignant and revealing look at a moment when the girls' paths diverge and their futures are altered forever.

Lena's mother, Annabel, has always been a mystery--a ghost from Lena's past--until now. Her journey from teenage runaway to prisoner of the state is a taut, gripping narrative that expands the Delirium world and illuminates events--and Lena--through a new point of view.

And as the passionate, fierce leader of a rebel group in the Wilds, Raven plays an integral role in the resistance effort and comes into Lena's life at a crucial time. Crackling with intensity, Raven is a brilliant story told in the voice of one of the strongest and most tenacious characters in the Delirium world.

IN A NUTSHELL
First I would like to start off by saying I enjoyed the Delirium series so reading the short stories of Hana, Raven, and Anabel was fun. I enjoyed taking a small step back into this deliria-free world. Hana and Annabel were the two I most looked forward too.
For these short stories you don't have to read the series, but I guarantee they will make much more sense if you have already read the books because Hana and Ravens story are just their POVs on what happened during a specific scene. Annabel's is more open I think.

HANA
Hana is Lena's best friend and soon to be matched with the mayors son.
In delirium we don't see her much, so I was kind of glad we got a small glimpse into her life. Hana's short story was during a underground party that was raided. She had to hide.
As much as her parents tried to keep her from being friends with Lena, you saw that Hana still cared for Lena.

ANNABEL
Annabel is Lena's mother, who until book 2 we thought to be dead. She has a bigger part to the story then we initially thought. What really happened to her is she had gotten locked up in the tombs because she was believed to have the disease. This story revolves around this lock up. It shows how being locked up can drive a person crazy, but it doesn't have too. With help from the inside, Annabel continues to plan on how to escape from the tombs. I really enjoyed this story.

RAVEN
Raven's story was my least favorite. I didn't really enjoy her in the series either. Her story does give us different insights as to why she is they way she is. One is how she came to live in the wilds, who blue was to her, and her feelings for Tack. Then it goes into a scene from book 2 I believe where her, Tack, and Lena are at a rally for Julian who is about to get the procedure.

Reviews for The Delirium Series
Delirium|Pandemonium|Requiem|

Posted by Ashley @ Bookaholics Anonymous at 11:57 AM