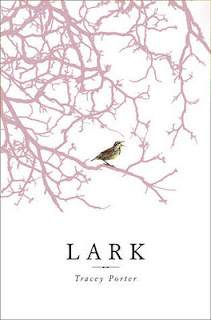 OUTLINE:
When sixteen-year-old Lark Austin is kidnapped from her Virginia hometown and left to die in a snowy forest, she leaves behind two friends who are stunned by the loss. As Lark's former best friend, Eve can't shake the guilt that this tragedy was somehow her fault. Meanwhile, Nyetta is haunted each night by Lark's ghost, who comes through the bedroom window and begs Nyetta to set her soul free. Eve and Nyetta realize that Lark is trapped in limbo, and only by coming together to heal themselves will they discover why.

As you can see this review is being done after a re-read I had of it. I first read it back in 2011 when it came out.

My first thought when reading this was the book Lovely Bones by Alice Sebold, if you've never heard of this book before go look it up on goodreads, or watch the movie. (it has Mark Wahlberg in it).

I'm not to sure what my thoughts are on this one actually. It was a tiny book so we weren't able to learn a whole bunch. It was told in 3 different POVs which can either be really good or horrible. I can't really say I enjoyed it all that much. Maybe, it was the changing of point of views or the characters themselves.

I did enjoy the message and the hope that came with it.

The first point of view was from Lark, the spirit, who died in the woods. I can say that the parts with Lark stuck in what she described as her limbo was interesting. It was a different perspective of limbo. It wasn't this gray place, but the place where she died. If she was to get out of limbo, and not become a tree like the others who had apparently died in horrible ways she had to get somebody to free her soul. She had to let someone know how she died.

This is where the next POV kind of comes in to play  Nyetta, is a younger girl that Lark use to babysit. She is also the one that can see Larks spirit, and her mom takes her to a shrink. Nyetta from then on tries to keep quiet about seeing Larks ghost. I had this overwhelming feeling where I wanted to just hug Nyetta and tell her things would be okay. Larks ghost was always trying to get Nyetta to see where she was hurt, and the fact that the poor girl had to also deal with a Dad having another family. Poor girl. With everything she went through I thought she dealt with it like a champ. When she finally had someone to believe her about Lark things became easier for her. #Youreachamp

The third POV was told from Eve, she was Lark's former best friend. I understand how you can fall out of being someone's best friend because it's happened to me. Stupid reasons shouldn't break up  friendships though. I guess to Eve it wasn't a stupid reason. You could still tell that the loss of Lark did affect her. Loss is hard if it's someone who you are or were friends with doesn't matter. In the end I'm glad that eyes were opened up.

WHAT I DIDN'T LIKE:
The only issue I think I had with it was it was a bit choppy. The sentences were short. If that makes any sense.
Posted by Ashley @ Bookaholics Anonymous at 1:51 PM