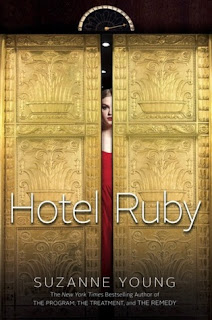 AUTHOR: Suzanne Young
PUBLISHED: November 3, 2015
PUBLISHER: Simon Pulse
PAGES: 288
SERIES/STAND ALONE: Stand alone
SOURCE: ARC won from WinterHaven
CHALLENGES: None
OUTLINE:
Stay tonight. Stay forever.
When Audrey Casella arrives for an unplanned stay at the grand Hotel Ruby, she’s grateful for the detour. Just months after their mother’s death, Audrey and her brother, Daniel, are on their way to live with their grandmother, dumped on the doorstep of a DNA-matched stranger because their father is drowning in his grief.
Audrey and her family only plan to stay the night, but life in the Ruby can be intoxicating, extending their stay as it provides endless distractions—including handsome guest Elias Lange, who sends Audrey’s pulse racing. However, the hotel proves to be as strange as it is beautiful. Nightly fancy affairs in the ballroom are invitation only, and Audrey seems to be the one guest who doesn’t have an invite. Instead, she joins the hotel staff on the rooftop, catching whispers about the hotel’s dark past.
The more Audrey learns about the new people she’s met, the more her curiosity grows. She’s torn in different directions—the pull of her past with its overwhelming loss, the promise of a future that holds little joy, and an in-between life in a place that is so much more than it seems…
Welcome to the Ruby.

IN A NUTSHELL
When I first saw this book I knew it was something I wanted to read. The cover alone is pretty and enticing. I seem to have a good relationship with the books written by Suzanne Young as well so it was no surprise that I enjoyed it. Before I even started the book I figured out at least some of what was going to happen. What I didn't expect was for the (almost ending.) I don't know if this will be a proper review because so much of the story lies within the twists and the whats of the story.

SETTING
Hotel Ruby is the title so we know from that it's going to mainly take place in the hotel, but The Ruby is so much more than just the setting it's the soul of this book (along with other souls), it's a character in its self, it's a magnet for a special type of person.

A hotel can be an exciting setting because there's always a backstory to the the story. It can be a haunting one, an interesting one, or it can be a plain Jane one. The Ruby has a few stories, and the guests and employees tell it so beautifully if not a little creepy.

CHARACTERS
Despite the crap that Audrey was dealing with I think she showed how strong she was. The hotel was making her a bit crazy, but she more or less kept her shit together. Even when things started taking a turn for the worse she believed. I'm not sure  what option I would have chosen had I been her.
Then we have Elias Lange, that mysterious, brooding boy who lives in a hotel.
Catherine who despite being an ice queen throughout the story suddenly warms up a bit.

ENDING
I knew some of the twists that happened, but I wasn't expecting the ending it had. I'm not sure if I was satisfied with it or not. I think it really showed who the characters were in the end.
In a way this story has a similar feel to another contemporary YA. Do you want to know which one? It might be a small spoiler. The book I'm thinking of is If I Stay by Gayle Forman. If you read that then this has that vibe of which would be better life or death?