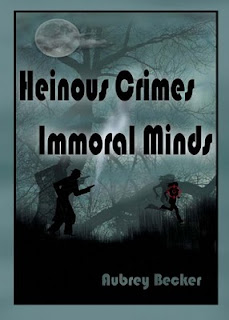 AUTHOR: Aubrey BeckerPUBLISHER: Entryway
PAGES:130
OUTLINE: Richard has caught me.
I tried to run but was too slow.
I tried to fight back
but I wasn’t strong enough.
I pled with him but he would not listen.
Here I lie with Richard hovering over me.
His finger rests on the trigger.
The gun barrel is staring me in the face.
Every memory I ever knew flashes
through my mind.
Every person I ever loved
will never see me again.
This is it. I’m going to die!
I close my eyes and pray for a miracle.
My fear is that a miracle may be too late.
STARTED:
FINISHED: 10-30-10
SIDE NOTE: This is a debut book from Aubrey Becker. I have the pleasure of getting to read it because I'm a friend. I have to say I couldn't be more happy for her either this has been one of her many dreams since I've known her to write and get published. To be able to see it in print is awesome because I know how long she worked on it. So with that being said here's my review.
MY THOUGHTS: Alright, I've sat here for awhile thinking how do I want to write this review. As, you may have guessed I'm not the best at writing these kind of things,but I still sit here and try. This story is about one girls fight to survive and to take back her life from a man who murdered her mom. After, Leyla answers a phone call from her step-father asking her to come and take him to the hospital because he "thinks" he's dying, and agrees. Things take a turn for the worse. Going over his house was probably the biggest mistake she could have made. Now with everything that's happened, Leyla is being stalked. Even with her friends by her side telling her things are okay. They don't know the full truth. They don't see how bad this is affecting her life. Will she actually be able to live a happy life knowing that out there among people is the one person who's intent is to make Leyla's life hell, and maybe even worse.
This is really a good read. The things that happen in it are believable, and sometimes you feel like you just want to tell Leyla that everything is ok. Although, I kind of wanted to hit her for answering the phone call, but without that there wouldn't be a story so it's all good. It has all the little parts that make a story good: action, romance, suspense, humorous characters.
I must say my favorite character wasn't the main one I actually liked the best friend. She was always fast to make a snappy comeback, but whenever her friend needed her she was there. Then of course the brothers best friend that's always a plus because when ever there's a brother there's always a hot friend right?
So go ahead and do yourself a favor. Read it! It's a short read for anyone who doesn't like very big books.
Amazon link here
MEMORABLE QUOTES:
-Imagine that if you were to crack open Heather's head, rainbows, flowers, unicorns, and sunshine would spew out, like a preschool cartoon. (Leyla)
-If there's one thing that can bring peace, it's this moment right now. When the sun rises, it seems like it's telling the world a new day is here, to let go of yesterday and expect beauty in today. (Leyla)
-If I act like I don't care tomorrow it's not because I don't care.  it's because your brother has a very short fuse and I treasure my face. (Mason)
He's a big softy (Leyla)
Yeah, he's fist ain't so soft (Mason)

Posted by Ashley @ Bookaholics Anonymous at 4:16 AM