I Heart You You Haunt Me Review 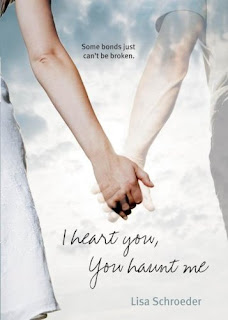 Girl gets boy back...

Ava can't see him or touch him, unless she's dreaming. She can't hear his voice, except for the faint whispers in her mind. Most would think she's crazy, but she knows he's here.

Jackson. The boy Ava thought she'd spend the rest of her life with. He's back from the dead, as proof that love truly knows no bounds.

MY THOUGHTS:
Bought at HPB

FYI- I love the book cover.

The story starts off with Ava at Jackson's funeral, and continues on with her fighting her guilt with what happened to him. Then she starts to notice a presence, things happen around her at her house like the music player turns on, candles flicker, cabinets open, the smell of sandlewood cream. At times it seems like he's actually a real person and not ghost with the tantrums he throws, the way he gets jealous, and being overprotective. A little creepy for a ghost right?
I just finished this book, and I have to admit at first I didn't think I would like it because it was written in versus. I actually had never seen a book written in poem like form (no rhyming involved though) beause it was written like that I looked over it at the bookstore, but everytime I went back there it was. I finally decided I would get it because I had seen good reviews about it. I'm very glad I did. It was beautifully written. I loved the way it just went together. Sorry can't think of a word for that. It's a good book to show how someone can hold on to something that's no longer there, and feel the guilt. It's about how to let go of that person/guilt and move on because holding on to it doesn't make life any easier and it won't bring them back.

I liked Ava as a character I had that kind of connection with the character that's good to have because it makes you understand them and to feel what they're feeling. I wasn't thrilled with her ex-boyfriend I didn't really see any point in him being it, but that's just me. I did however, like the other boy that showed up during it Lyric (I like that for a name). You'll have to read to find out about him. Then there were Ava's friends Jessa, Zoe, and Cal. I figured as friends they would've tried being there a little more for her even if she didn't want them.

One thing that I was a little disappointed about was how long it took for us to find out what happened to Jackson.  All we know is that Ava thinks it was her fault, but we don't know why she thinks that until almost the end. I guess I just like to know things sooner, but that just makes you want to read it quicker.

I'm definitely going to get some more books from this author. I actually watched a book trailer fan made for Chasing Brooklyn. It sounded like a good book.

QUOTES:
- Alone we were good, together we were fantastic (Ava)
- As we pull away, my eyes stay glued to the casket. It's proof that sometimes life does not go on. (Ava)
- If I sacrifice my heart for Jackson, will I be dead too? (Ava)
- Not as hard as holding on to something that wasn't real. (Nick)

Well that is my diagnosis. Let me know what you think.
Posted by Ashley @ Bookaholics Anonymous at 1:22 PM