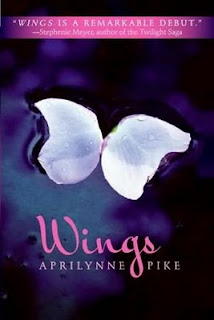 AUTHOR: Aprilynne Pike
PUBLISHER: HarperTeen
PAGES: 294
STAND ALONE/SERIES: Series (Wings book 1, Spells book 2, Illusions book 3)
OUTLINE:
Laurel was mesmerized, staring at the pale things with wide eyes. They were terrifyingly beautiful—too beautiful for words.
Laurel turned to the mirror again, her eyes on the hovering petals that floated beside her head. They looked almost like wings.
In this extraordinary tale of magic and intrigue, romance and danger, everything you thought you knew about faeries will be changed forever.

STARTED: 11-21-10
FINISHED: 11-23-10
MY THOUGHTS:
I've read some peoples reviews on this, and it has been mixed. Some like..some don't. After seeing that My Enchanted Rambling liked it and I commented, and she told me I should see for myself. I've had the book for awhile now, and I haven't read any Faery books that I can remember so I did, and I'm definitely glad. I can honestly say I want to read the second one to learn more about Laurel, and the 3rd when it comes out next year.

At first it seemed to start off kind of slow, but probably about half way through it started to get interesting. I was wanting to know what happened with the characters more and more. Here's the low-down...Laurel was adopted when she was 3. She was left on the doorstep of her parents house in a basket none the less. How funny is that? A 3 year old in a basket. Anyways, later on in the book you learn who left her there and why..kind of. By age 15 her parents move them to a new city where she's put into a public school. (She's been homeschooled all her young life) There she meets David. Yes, there's a boy in the story, or two. :) During the story Laurel notices something on her back, but what it is she doesn't know. At first she thinks it's just a zit, just a normal teenage thing. She meets Tamani, a very different kind of boy, who let's her in on what she is. What she finds out kind of throws her for a loop. :) There lies our love triangle now. We just love those love triangles. From there on other things start happening. I don't want to really go more into it. let's just say her dad starts getting sick, some creepy realtor guy shows up, and she continues to learn of her heritage. I love the river scene it's pretty intense. I mean you know pretty much somethings going to happen, but until it does your holding your breath like OMG! I know I'm kind of wacky with the reviews. I give a little and your stuck wondering more right? Just nod and agree.

The MC is Laurel, she's seems like a down to earth, sweet kind of girl who would do anyhting for her friends. In the begining of the story she doesn't have many friends because she's been home-schooled, but she soon makes friends, David and Chelsea, at her new school. She also meets a strange and exoctic boy in the woods by her old house. I really didn't have to many problems with her as a character. She's a 15 year old so annoying habits, and whiney-ness comes with the territory. I had a hard time figuring out who I would like to see her with either David or Tamani. Both are guys that seem to like her and want to be with her.

David is the best friend she meets when she moves to her new school, and is the one person who she can turn to with her most prized secret. I actually feel sorry for him because he's kind in that rut where your the best friend but you would rather be more. He shows he truly cares about her when they go snooping around places they shouldn't be, or gets in to trouble with his mom for staying out. Like I said I'm torn between both guys so I wouldn't know what to do for Laurel.

Tamani our exoctic boy from another realm. He is Laurel's protector we find out and has been since she was little. Like David it seems he would do just about anything for Miss Laurel too. There's also more to Laurel and his relationship then Laurel knows. We have ourselves the exoctic, mysterious boy.

Then we have the story's other character, Chelsea who's David friends but soon becomes Laurel's, she's a very blunt person. If she has something on her mind she says it. Then you have Laurel's parents, her mom who doesn't believe in doctors or medicine (just herbel, natural stuff), and her dad who owns a bookstore (how cool is that, I wanna bookstore), Then David's mom who's the opposite of Laurel's parents, she's a pharmacist at a drugstore. ( I love this because I work in a pharmacy) Then there's Barnes (the supposed realtor), and his sidekicks Scarface and Red (That should tell you something).

MEMORABLE QUOTES:
-Typical mom advice sweet, honest, and completely useless. (laurel)
-What? (laurel)
It's just well, it kinda makes sense. (David)
Some crazy guy claims I'm a mythical creature, and that makes sense to you. (Laurel)
-How do I give you tissue samples? (Laurel)
We could get epithelial cells from your cheek like they do on CSI. (David)
CSI? you're going to investigate me now? (Laurel)
-Laurel, David? Would you like to share the joke with the rest of the class? (Teacher)
No,Sir...but thank you for asking. (David)
David, one. Teacher who wishes he was as smart as david? Zero. (Laurel thinking it)
-You know after I got done thinking you were a crazy homeless guy. (Laurel to Tamani)
-We like things that sparkle you, know. (Tamani)
Laurel thought of the glass prisms she had strung across her bedroom window years ago. I thought that was just a personal preference. (Laurel)
-Eye of Hecate, do neither of you know how to follow directions? (Tamani)
Apparently not. (Laurel)
-I'm getting pretty tired of the way you drive me like a slave in that bookstore. I have rights you know. He added with a laugh. (David)
EXTRAS:
This is another one of the bookcover actually like this one. It's more sparkley (at least it looks that way). I believe this is the paperback one so if I go the way I'm going if I see it in paperback I'm liable to get it. It kind of goes better with the books theme too. Although the cover I have above has it's importance to the book as well. :)

Have you read the book if so what'd you think?
Posted by Ashley @ Bookaholics Anonymous at 6:48 PM