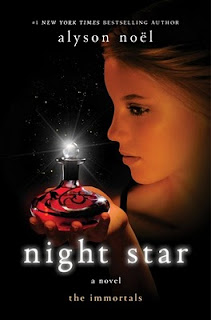 OUTLINE: After fighting for centuries to be together, Ever and Damen’s future hinges on one final showdown that will leave readers gasping for breath. (Sorry this isn't a full on outline. If you want to know more go to good reads. I only took the top part because the other gave away to much if you haven't read the series)

MY THOUGHTS:
I have very conflicting thoughts about this one actually. While I love the series, I'm not sure this was my absolute favorite. Sorry if any of this isn't very helpful. Hum?

A few things I liked about the book were that Haven actually got a bigger part in this one, granted I didn't like who she became in it. Still she had a major part. I guess in a way it's good to see characters develop differently, and not stay weak and the same throughout the series. Haven remained her own..yes, she was a bitch. She could have easily used the elixir for the better, and been a better person. This little twist is what made me like this book had it not been that way I'm not sure that I could have taken much more of Ever and Damen's weird-ass romance. I kind of wanted to just give up on them. I mean don't get me wrong I really do love the characters and stories, but after 4 books of it..well a little tiring.

I love how Miles stayed neutral to all the fighting between his two best friends, and when he learned of the secrets and was offered the same..he turned it down. Yea! Go Miles!

Then being able to see more of Ever's past lives with Damen, and learn some of the not so happy moments that Damen dilberately hid from her was another highlight of the book.

I was sad to see the way it ended not something I really wanted to happen, but what's done is done.

I'm ready, ready for the last book Everlasting to be out. :)

If you haven't read the series. I would recommend it. It's not vampire or werewolf related, but it's got the paranormal aspect down. Also has some good otherworlds in it. I love summerland (the magical realm) It actually has a darker part to it which I'm dying to know about. :)

I know this is short compared to some other reviews, but I couldn't think of much. :(


QUOTES:
-So are we good here? Did I pass? Can I collect my gold star now and go home? (Jude)
-It's like an infinite show set on permenant repeat, taunting me with all that I could've been, if only I'd chosen differently. If only I followed my heart instead of my head. (Ever)