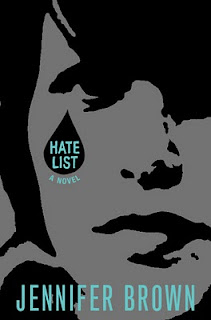 OUTLINE: Five months ago, Valerie Leftman's boyfriend, Nick, opened fire on their school cafeteria. Shot trying to stop him, Valerie inadvertently saved the life of a classmate, but was implicated in the shootings because of the list she helped create. A list of people and things she and Nick hated. The list he used to pick his targets.Now, after a summer of seclusion, Val is forced to confront her guilt as she returns to school to complete her senior year. Haunted by the memory of the boyfriend she still loves and navigating rocky relationships with her family, former friends and the girl whose life she saved, Val must come to grips with the tragedy that took place and her role in it, in order to make amends and move on with her life.

I did this review in Vlog format. Hope it's enjoyable.

Oops I just realized there's 4 parts to the book. When I was looking through it at my quotes.

-People do it all the time--assume that they "know" what's going on in someone else's head. That's impossible. And to think it's possible is a mistake. A really big mistake. A life-ruining one if you're not careful.
-Because who you are is supposed to be the easiest question in the world to answer, right? Only for me it hadn't been easy for a very long time. maybe it never was. (Val)
-Being my friend would be a tough risk to take. (Val)
- A little edward Scissorhands or something, but in a cool way. (Stacey)
-Pretending my heart wasn't breaking, Pretending I wasn't angry, confused, scared. (Val)
-Life isn't fair. A fair is a place where you eat corndogs and ride the ferris Wheel. (Dr Heiler)
I hate when you say that. (Val)
-So do my kids. (Dr)
- It's the sunrise that gets people's attention. Rebirth always does. (Bea)
- Being pretty isn't everything, but sometimes being ugly. (Val)
-Now that I knew who I wasn't, I was determined to remember who I was. Who I would become. (Val)

Posted by Ashley @ Bookaholics Anonymous at 12:35 AM