Book Review: All About Daisy 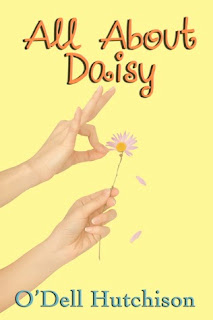 Fourteen-year-old Daisy barely made it through middle school. After three years of being constantly taunted and bullied, she's decided it's time for a change. It all begins with a list of things she feels she needs: a best friend, popularity, a boyfriend, a first kiss, a spot on the cheerleading squad, and most importantly, boobs. With list in hand, Daisy just knows she will make a huge splash at Glenmark High, and her days of being miserable will be over.

The splash she makes isn't exactly what she was going for, and after a disastrous first day, she is ready to throw in the towel. It only takes a chance meeting with sophomore Russel Bryan, her grade school crush, to change everything. Soon, Daisy finds herself hanging out with the popular girls, preparing to try out for a spot on the cheerleading squad and looking forward to the homecoming dance.

Just when things start to look up for her, a betrayal by a new friend shatters everything she had hoped for. With her reputation on the line and the threat of a family secret being revealed, Daisy decides to take things into her own hands. It may not be her destiny to be popular, but she is done being taken advantage of.

THOUGHTS:
For Daisy going to high school was suppose to be a new expierence and forgetting about all that happened in middle school. The problem is can Daisy make that happen, or will she be stuck in the same boat? Daisy made a list of what she wants out of high school, and by all means she's going to stick by it even if it means losing herself in the process. 1. Get a boyfriend 2. Be a cheerleader. So what happens when one of the hottest guys suddenly takes an interest in you? A best friend you had in elementary school, and her new popular friend wants to befriend you? She soon realizes that having everything isn't always what it's cracked up to be. Being popular---not so much fun when you have to pretend your best friend is a charity case.

Going into the book I thought it would be a cute read, kind of light if that makes any sense. It was definitely that, but also I could see an underlying message. Just be who you are. That truly is a precious gift. What I find true about this book is that it's exactly what I remember high school being like. You're suppose to be friends will somehow find a way to stab you in the back. Maybe it's not like that for everyone, but I think it's true.

It had a little bit of everything. The diverse characters, the bullying, heartbreak, mean girls, drama.

As a character Daisy was a bit whiny, but that to me is expected from someone her age. I didn't really understand her fasicnation with the popular guy. I wasn't to stuck on him. I liked finding some stuff out about her brother, and her being able to go along with him. I liked Daisy's real friend Margaret because she seemed to genuinely care about her. The other popular girls did remind me of the movie Mean girls.

All in all I look forward to seeing how Daisy grows as a character in the other books along with other things. :)
Posted by Ashley @ Bookaholics Anonymous at 10:29 PM

Email ThisBlogThis!Share to TwitterShare to FacebookShare to Pinterest
Labels: reviews