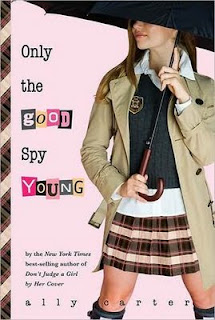 OUTLINE: When Cammie Morgan enrolled at the Gallagher Academy, she knew she was preparing for the dangerous life of a spy. What she didn’t know was that the serious, real-life danger would start during her junior year of high school. But that’s exactly what happened two months ago when Cammie faced off against an ancient terrorist organization dead set on kidnapping her.
Now the danger follows her everywhere, and even Cammie “The Chameleon” can’t hide. When a terrifying encounter in London reveals that one of her most-trusted allies is actually a rogue double-agent, Cammie no longer knows if she can trust her classmates, her teachers—or even her own heart.

If you haven't read the first 3 books (or my reviews) some stuff might seem odd. :)
MY THOUGHTS:
Review style the Cammie Morgan Way

COVERT OPERATIONS REPORT:
Operative O. begins what she hopes is a semi-helpful review of Only the Good Spy Young by Ally Carter.

The Operative was able to ascertain the following:
-Operative O. learned more about the "Mysterious Blackthorne Institute for Boys" and let me tell you there's a reason it's hidden and surrounded by mountians, rivers, and forest.
-Why Joe Solomon acted the way he did.
-Sometimes it's better to not know everything because in the end it'll make things worse.
-more info on Zach became avaiable. It's always fun to learn about the hotties. :)
-learned about Bex's family. (always nice to know about a fellow spy)

Alright now that I've had my little fun with "The Report" I actually read the first book last year I think, and loved it. Why it took me so long to read the rest of the books I don't know. Stupid me. I finished the next 3 books. (This being the last for now) in about 2 days tops. I was hooked. Yes, at times it seemed like each book was like the one before: a few weeks before school something happens, get to school to learn something about what happened, mission from teacher, the girls own mission on the side, the major mission for a grade (supposely), back to school with an ending that is or isn't good. Still I loved reading them.


Overview:
This time Cammie started off in London with her best friend Bex and Bex's parents.They were all having fun ice skating when things went south, and then Joe Solomon shows up with a warning/message for Cammie "follow the pidgeons". Poor Cammie has no idea what that means, and why is it her once hot Cove Ops teacher looks mad crazy. Before she can talk to him he takes off. Then she's taken to some CIA people who question her about what happened and what he told her. What a wonderful winter vacation right? When she returns to the academy she learns things have definitely changed for her and the school. The school that she once was able to roam freely about is now a no-roam-free zone. All her secret passageways and hideouts are all closed up, and she's pretty much stuck inside.

Characters:
Really there's not much difference in the characters now then when the books started except maybe that Bex and Cammie's roles have flip flopped. :) Cammie is the one always putting herself in danger and Bex is trying to be level-headed, but when your a spy level-headed sometimes doesn't work. Even though not much has changed with the characters I still enjoyed them very much. The girls are always planning something and the list they make are funny.

It was nice to actually learn a bit more about Zach, the mysterious blackthorn boy from the other two books. We got to see inside the grounds of blackthorne. I like Zach, but then again what girl doesn't like those dangerous type.

We got to see the workings of Joe Solomon, and see what his connection with everything was.

We learned a little about Cammie's Dad through the journals. Is he really still alive after all this time?

Okay I know this wasn't that helpful, but there's only so much you can say about a 4th book in a series. :) I will say this if you haven't read them. I recommend it they're adorable and spies. What's not to love?

QUOTES:
-So Scary? Yeah scary and I go way back. (Cammie)

-If we hadn't hated him alot, we might have liked him a little at that moment, but we did. So we didn't. (Cammie talking about Agent Townsend)

-Are you still mad at me? (Zach)
(I didn't say a word-Cammie)
Ooh, the silent treatment. (Zach)
Posted by Ashley @ Bookaholics Anonymous at 9:00 PM