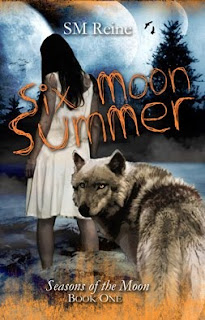 OUTLINE: Rylie's parents are going through a messy divorce. They send her to summer camp to get her out of the way of their fighting lawyers, but she's just as miserable at the girls' camp as she was at home-- there's nothing vegetarian for her to eat at the mess hall, she hates hiking and archery, and the other campers taunt Rylie mercilessly.

One night, the bullying goes too far, and Rylie runs away. She doesn't get far. It's a full moon, and she isn't alone in the forest. A wild animal mauls her. She's certain she won't survive.
Want to know a little more check out Goodreads

MY THOUGHTS:
Alright so you've got the idea from the summary what it's about right?

My short to cents summary
Rylie's parents sent her away to some summer camp so she wouldn't be caught in the middle of their divorce, but no matter how far you send someone she's still in the middle of it. That's not the story though. Rylie's story starts when she arrives at the camp. How can she possibley enjoy 3 months of a place where food for vegetarians isn't served, she doesn't enjoy any of the activities, and the girls here are hands down bitchy. Answer? Run away! Lost in the woods she's attacked by a creature. What kind of creature she doesn't know. Waking up in the morning in her bed is a surprise to her...everything seems to be in working order with her. So had it all been a nightmare?

The Story itself
I could probably continue on with my summary, but I won't I'll save you the reading. I have to say that I love reading stories about the paranormal to me it's just more interesting: Vampire, fairies, dragons, werewolves, witches. You get the picture. Not only that but you get to see how the authors bring their own twists to the myths/lores. Now let's focus on the fact that this is a werewolf story. My apologies if you hadn't figured it out by the cover or the summary or title. So far the werewolf stories I have read have shown the werewolves as friends and protectors like Nightshade. They don't harm anyone. This story is a little different and I love it. None of the nice and cuddley werewolves like Jacob. No these are the actual mean werewolves and they have an agenda. I loved the way the author described the changing into a werewolf it doesn't just POOF happen. The stages that one goes through on the different moons. The words describing the change sounds really painful. I liked the way it flowed. :) Does that make sense? I have to say also that I thought it wrapped up nicely. If it wanted to it could be a stand alone in my opinion. There aren't any big cliffhangers making it to where you have to read a second to find something out. It does however, leave it open enough where a second book could begin. (which one will be. All Hallows Moon in October '11. YEA!) To me that's always a plus, I mean who wants to be made to read a second just to find out something. (I'm not a fan of the just stop, drop, and that's the end type books. I do read them though. I can't help it)

What about the characters?
Rylie is of course the main character I liked her well enough to me she was a typical teen except for the vegetarian part. :) She didn't get along with her mom, but she was ok with her dad. She did have a bit of that I hate my parents attitude, but what kid doesn't. I love her name. Just FYI. :) I really felt bad for her when she got to the camp, and the other girls didn't even give her a chance.
Seth was a good guy character for her. He had the mysterious-ness about him, and you didn't find out much until closer to the end. He could have gone any way. I liked how he always left little notes on Rylie's window to get her attention.
Cassidy was okay I actually would like to seen more of her, but again..reasons. Spoiler:  I was sad to see that she was a wolf. I wanted her and Rylie to be friends. :(
I wasn't really impressed with the mean girls. They were your pretty typical "mean" girls. Nothing to wow about them. I think the only other character that stood out to me was Jericho, the boys counselors, Spoiler: I was pretty sure that he was the wolf that changed her, and he was, but he had his reasons for things.
End.


Overall conclusion:
It's definitely worth the read if you like the paranormal and a bonus if you're just in the mood for werewolves, and not the sappy kind. :) It was short which is also good easy to finish. So go on check it out. :)

QUOTES: I know there were a few more I probably liked, but on my kindle the notes are a little different. :)
-You don't have to like them, but you need to love them (Seth) I think this just stuck with me because it rings true for me. It fits well with my family I sometimes don't like them but reguardless their my family and I need to love them. :)

Posted by Ashley @ Bookaholics Anonymous at 2:04 AM

Email ThisBlogThis!Share to TwitterShare to FacebookShare to Pinterest
Labels: from author, seasons of the moon series, werewolves