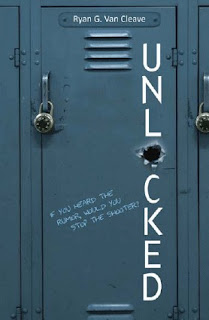 OUTLINE: Andy is the janitor's son, an outcast, a nobody. Then the rumor starts—that Blake has a gun in his locker. In a moment of misguided hopefulness, Andy steals the keys from his dad and opens up Blake's locker, hoping that finding the gun will change his own status. But the gun isn't there and Andy remains an outcast. When an unlikely friendship develops between the two loners, Blake shares most of his secrets with Andy
MY THOUGHTS:
I had mixed feelings on this one. I had to pick it up with a tagline like "If you heard a rumor, would you stop the shooter?" and the jacket flap of course.
It was a journey through one social outcasts life becoming friends with another outcast. In the beginning it wasn't to much really to like or dislike. I didn't care one way or another about the characters themselves. I think what kept me reading was wanting to know if something bad was going to happen. I mean what good can come from a supposed gun being in a locker at school. Nothing!
Andy had heard rumors of another boy bringing a gun to school and hiding it in his locker. Of course so had every other student in school so when Becky Ann asks if Andy would take a peek in Blakes locker and he might get something out of it he was if-fy, but when a popular girl tells you she wants something and in return you'll get something do you ignore her? Of course not!
He should have known that things aren't always that easy with the popular kids though. However, some good things did come from I guess you could call it snooping. He became friends with above mentioned outcast. They may have not talked much to each other, but sometimes a friend is someone you just need beside you. They shared their love of mcdonald fries, and games, and oh yeah one other thing that I'll let you read for yourself.
So when things start going south and Andy realizes maybe what Blake does say holds some truth, and things could get ugly if Andy doesn't tell the adults what he may/may not know. Andy questions what he believes to be right and wrong.
Question if you knew something bad might happen would you be that one person that could save your friend and maybe more? Even if it meant your only friend might turn his back on you, and the people who used to treat you like roadkill now have a sudden interest in being friends with you?
All answered as you read Unlocked by Ryan G. Van Cleave.
If you want a book that'll make you think give this one a shot. (No pun intended)

Email ThisBlogThis!Share to TwitterShare to FacebookShare to Pinterest
Labels: contemporary, versus, Ya