Book review: Through Her Eyes by Jennifer Archer 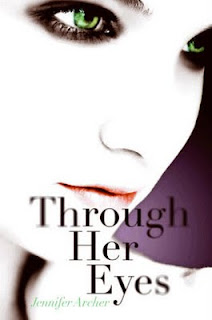 OUTLINE:
Every ghost has a story to tell.
The last place Tansy Piper wants to be is stuck in Cedar Canyon, Texas, in the middle of nowhere, with a bunch of small-town kids. But when her mother decides to move to the desolate West Texas town, Tansy has no choice but to go along. Once there, Tansy is immediately drawn to the turret of their rickety old house, a place she soon learns has a disturbing history. But it's the strange artifacts she finds in the cellar—a pocket watch, a journal of poetry, and a tiny crystal—that have the most chilling impact on her.
Tansy soon finds that through the lens of her camera, she can become part of a surreal black-and-white world where her life is intertwined with that of mysterious, troubled Henry, who lived in the same house and died decades earlier. It seems their lives are linked by fate and the artifacts she found, but as Tansy begins spending more and more time in the past, her present world starts to fade away. Tansy must untangle herself from Henry's dangerous reality—before she loses touch with her own life forever.

THOUGHTS:
This was actually a first for me in YA Ghost stories to read, and I must say I was not disappointed. I love the fact that it took place in Texas. (I've lived here my whole life)  It's nice to see Texas brought to life in books, even if Cedar Canyon is a fictional town it brought the life style of Texas and small towns to the forefront. Although not all Texans are cowboys, and we don't all where cowboy hats. What a big misconception. It's ok Tansy I'll forgive you. It would be cool to have a mom as a writer. I guess it might get old after a while moving like she does, but think of all the adventures you could have and people you would get to meet.

It took the story some time to pick up because Tansy, her mom, and grandpa just get to Cedar Canyon, and have to get settled in to a house that apparently her Grandpa lived at when he was younger. Upon arriving there her grandpa becomes consumed with feelings that the reader doesn't learn about until later. I have to say this I love seeing another family member in the story. As with most YA's you don't get alot of the Protags that have that connection to their family whether it's grandparents, parents, aunts, uncles, cousins you get the picture. (Maybe, I'm just not reading those books though. Who knows.) I love that it's the grandpa too. They're usually the laid back ones (or at least mine is he just goes along with whatever my grandma or others say). Being new in town means having to learn where to fit in especially in a town where everyone grew up together. I'm talking since diapers. So it's no surprise that Tansy takes to herself  in the beginning, and gets caught up in the old notebook of poetry she finds in her basement (Some things aren't always as they seem though), and also her photography. Which leads to the world hopping. Looking through her camera and seeing things in black n white. Things that shouldn't be there. Intriguing is it not?  After a few encounters with the locals though she let's her guard down by befriending Bethyl Ann aka Stinky and after while Tate.

I think my favorite character wasn't tansy, but her crazy Shakespearean friend Bethyl Ann. Bethyl Ann is that person who doesn't care what others think of her. She marches to the set of her own drums. She's herself, unique and proud. I mean who would enjoy being called stinky? Apparently she doesn't mind she just ignores it. She embraces her nerdiness. :) For that I applaud her.


EXTRAS:
An Author Interview I found that I enjoyed at Ya Addicts
Some pictures from a signing back in May I went too. Enjoy! 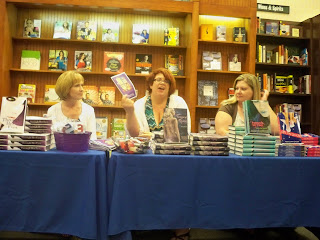