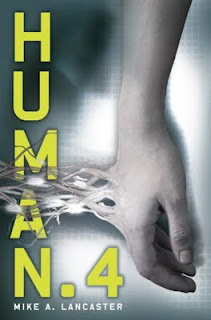 AUTHOR: Mike A. Lancaster
PUBLISHER: Egmont
PAGES: 231
SERIES/STAND ALONE: Stand alone
SOURCE: Bought
OUTLINE:
Kyle Straker volunteered to be hypnotized at the annual community talent show, expecting the same old lame amateur acts. But when he wakes up, his world will never be the same. Televisions and computers no longer work, but a strange language streams across their screens. Everyone’s behaving oddly. It’s as if Kyle doesn’t exist.

Is this nightmare a result of the hypnosis? Will Kyle wake up with a snap of fingers to roars of laughter? Or is this something much more sinister?
MY THOUGHTS:
It starts off with Kyle and everyone in the community at this annual talent show. One of the participants is a Hypnotist, supposedly not a very good one, so when he asks for volunteers people kind of ignore him. That could have been a mistake depending on the way you look at the situation after the hypnosis. He gets his  volunteers; Two adults, Kyle, and a girl Kyle use to like. The four fall into it, and when they wake their world is different for lack of a better word.

Technology doesn't work, and there's a strange alien language on every screen. Is it an alien invasion? Are they still hypnotized after all? Why are their family and friends acting as if they don't exist? The four set off to find out what's going on. Question is are they going to like what they find, and will it be a future that they're ready for?

I'll admit while reading this I was so freaking confused. I don't know if it was because it was told by someone talking into tapes, or what. I mean I understand that it's how the story was suppose to be written, and that it's going to just chop off parts because once a tape ends...it ends. We don't get to hear the rest of Kyle's thoughts, and I guess that's what annoys me the most. I did enjoy some of the editors notes though. It gave it a little something different.

Even with the odd format of the story I found that after finishing it I began wondering what if? What if we are  part of something bigger then we know. I'm not talking church type stuff either. What if we're just one version of  the human race, and we could be deleted and replaced with better models? I know this sounds off-the-wall, bizarre, and you're probably thinking I'm on something (which I'm not). I'm just saying. Technology has become very advanced and we tend to rely on it for most everything.

This is kind of a vague review I know, but I feel like if I say to much it'll give away whats happening to them, and I don't want that. :)

Note: This may not be relevant, but it's something that oddly enough bothers me. This book kind of brought this to the fore-front of my mind.
Have you ever had that feeling when you wake up everyone you know isn't going to be there, or if they are they won't know you, and it'll be as if you never existed. Is that just me?

QUOTES:
No neat happy ending, but an ending all the same.

OTHER PLACES THIS REVIEW IS AT:
Good Reads
Amazon
Posted by Ashley @ Bookaholics Anonymous at 7:07 PM