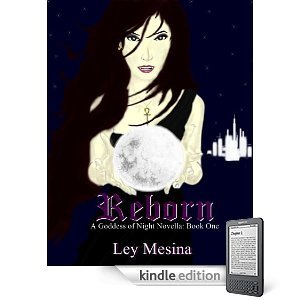 AUTHOR: Ley Mesina
TITLE: Reborn: A Goddess of Night Novella
PUBLISHER: ?
PAGES: ?
SERIES/STAND ALONE:
SOURCE: Author
TYPE: E-book
OUTLINE:
Lily Westbrook discovers that being half witch and half vampire is more of a challenge than she thought. When her powers mature on her eighteenth birthday, she unlocks a mystery that many witches thought was a legend.

After moving back to her birthplace in Cedar Creek, MA to attend Kensington University, Lily is instantly pulled deeper into the world she was kept from- the world of witches and vampires-uncovering the truth about her past and discovering who she is meant to be.
MY THOUGHTS:
The story is about a war between Witches and Vampires. Which that alone is different from the whole werewolves/vampire rivalry so it gave it a nice little twist on the story front.
In the beginning of the story I had a really hard time keeping up with what was going on because so many characters kept showing up, and different things happening to them. Apparently, I'm easily confused. I will say on some stories that would probably work for me as long as I'm eased into it, and I can separate what's going on. Does that make sense? Don't feel bad it didn't to me either.
Once Lily was away from the person taking care of her, and at her new school that's when I started to enjoy the story a little more. I found myself being able to enjoy the characters. (at least some others I didn't like to much.) Lily was introduced to Xander and Drew who were the sons of Arthur an old friend of Lily's parents, and also Roxanne who came to find help for her parents. Like I said it was at times confusing, but I got use to it.
Part of the story consisted of The Goddess of Night, which you realize soon who she is. It's said that there's always just one and when a new one is born the other dies. Who vice versa I can't remember. I think this part intrigued because I've read different books that have used her as part of the storyline. (namely The house of Night series) So to me it was nice to see her used a little differently.
I think it has potential to be a lot more, and I was sad to just see it end so hopefully I'll be able to read more. There were errors throughout, but I'm not perfect, I'm not an editor. (I'm horrible at commas and punctuation. As you can probably tell.) so it didn't bother me as much as it did some people. I read because I enjoy the characters and the storybuilding.
This was a mini review. I know it may have totally sucked, but what are you going to do.

Posted by Ashley @ Bookaholics Anonymous at 2:27 AM

Email ThisBlogThis!Share to TwitterShare to FacebookShare to Pinterest
Labels: book review, from author