Top Ten Tuesday: Series I need to finish or start 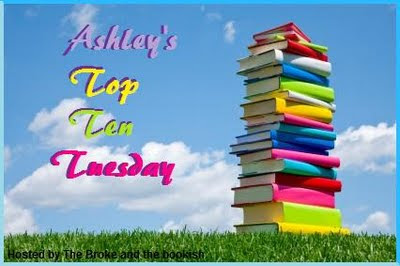 Top Ten Tuesday is a feature over at The Broke and the Bookish that you can do every Tuesday, and it's a list of bookish things. I'm so awesome at explaining things. Yes, that was totally meant to be sarcastic. Anyways, this week is a freebie we pick the topic, and amazingly enough I've been thinking about this particular one for awhile because 1.) I have tons of series that I've only read the first book in. Or haven't read any at all, but some how I have all the books. Failure on my part. B.) I was dying to know what happens when I started the series, and was mad when the other books weren't even out yet to read. Then I just never got around to them. III.) I went through hell trying to get the series completed so that I could read non-stop. Pink.) Ok, so I don't have another reason I just felt like adding a color in the list.
Here they are in no particular order...(and get ready to read because I'm in full on typing mode) Or you can simply look at the pictures and see what I picked. Reading will be more fun though because I'm running on low fumes as I write. :) which makes more interesting. In my opinion anyway. I guess that doesn't count though. READ..READ>> 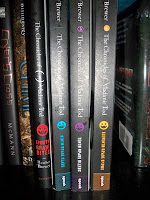 1.) The Chronicles of Vladmir Tod by Heather Brewer- I read the first two books, and really enjoyed them because it's in a male POV (better then that a teenage male POV) Something you rarely see in YA. The last book is 12th grade Kills which I don't have, and need to get. Maybe then I'll read the rest. Oh did I mention their Vampires. (Oh, they don't sparkle either. I'm just saying!) Just an ordinary vampire boy who has ordinary vampire boy problems. (I haven't clue what that means) 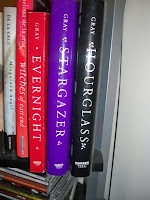 2.)The Evernight Series by Claudia Gray- This was one of the first series I started after my Twilight run-in. After those I had to have others books similar to Twilight. Truth be told it was definitely not twilight reincarnated or whatever. It had it's own story. Vampire Hunters after Vampires. You know that whole deal. You want to know something I read the first two books in no time, and now I have yet to read Hourglass. I  don't even have Afterlife. This might be a good series to just start all over, and read from beginning to end. Only because I forgot what happened. Does that make me a bad reader?  I know the premise, but the details are a little faded. So as soon as I decide to get Afterlife I might just have an Evernight read-thon  for myself. 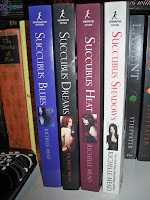 3.) The Georgia Kincaid Series (or what I call the succubus series) by Richelle Mead- This one I mean seriously do I really have to explain my why this is on the list. I wouldn't think I'd have to say anything, but just in case you're not familiar with my obsession that is Richelle's VA books. I'll tell you. It's Richelle Mead! I mean I'm down with any of her books. :) It has six books in it as well. The 2nd book I don't have it and the 6th ones comes out this month. I have read the excerpts though from each book, and love it. 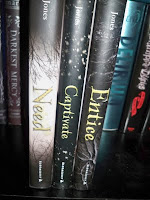 4.) The Need Series by Carrie Jones- Is that what it's called? I'm not sure. Anyways, there are going to be four books in the series the fourth which isn't out and apparently is nameless at the moment. (From the authors site) It has fae, and I'm not sure what else. (I told you I'm bad with descriptions.) It sounds awesome to the Nth degree. If they are anything like her blog, or her random facebook comments I'm sure I'll love them. 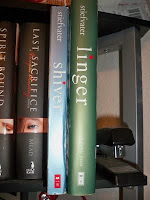 5.) The Wolves of Mercy Falls Series (aka The Shiver series)- My first werewolves book after Twilight. Are you getting tired of seeing that. It could be like an after school special. After Twilight Presents...(Sorry it's 230am here, and I'm a little tired, but I won't fall a lseep so I write.) I went to walmart to find something to read that would satisfy my need to read at the time, and I foud this little Jewel called Shiver. It sounded adorable and cute and it seemed to have a fluffiness to it. So I bought it and read in a few days. (I couldn't really tell you about it now because it's been awhile.) Then when the second book Linger came out I never read it. I bought it yes. Read it nope. Now the last book is out called Forever. My thinking here is I'll wait until I can get the last one, and then maybe re-read the first and go from there. That way I can  have reviews for all them, and I can re-jog my memory on what happend to Grace and Sam. 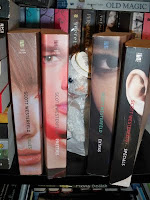 6.)The Uglies Series by Scott Westerfield- It took me awhile to acquire all four books. (Only for them to come out with new covers darn them.) I've never been to much in to the dystopian craze, and that's sort of what these books are so I put them off. My friend Amy, has told me a few times that I should read them because she thinks I might enjoy them, and I totally trust her opinion. Why I haven't yet I really don't know. Each time I re-read the synopsis it gets more interesting. So one day I will read them. (Side note: That's Fancy my beanie baby cat stuck in between Pretties and extras. Poor Fancy!) 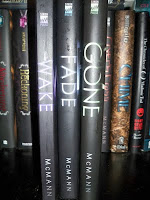 7.) The Dream Catcher Series (aka wake series) by Lisa McMann- It's a trilogy, and I have all three books. Basically I have no reason why I couldn't read this one. I just haven't. Well I did read the first which was okay. Maybe that's why I haven't read the others if it's merely an okay book I'm not stoked to read the others. Simple as that. I would like to know what ends up happening at some point because it doesn't really tell you what happens to the characters. I for one want to know what's going with Cabel. I think he was my fave character. 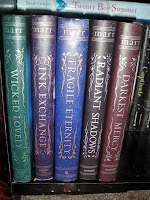 8.) The Wicked Lovely series by Melissa Marr- Yes, I spent forever trying to get all these darned books so I could read them, and what not. Then what do I not do? Read them. These I'm told are kind of different as in each book is told in a few characters POVs then leave for a book and come back for another. Am I right? Or just confusing ya'll?  I've seen really good things written about these so I should jump on the band wagon and read them soon. Oh did I mention it's fairies? 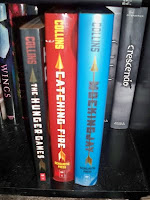 9.) The Hunger Games by Suzanne Collins- O-M-G I know right I haven't read or well finished this series. Where the hell have I been right? What the hell have I been doing? (I'm totally hiding from Lan here because I know besides VA this is a fave of hers.) Well let me tell you it took me almost a month or more to finish the first book. If I'm lying..I'm dying I swear. I couldn't for the life of me get into it so I stopped, and  finally I'm like Hey Ash you have to at least finish the first book, and see why everyone is in love with it. So I did and well I just never got around to reading the other two. Tell me should I finish them will it make a difference you think. I do know that as much as I couldn't get into the book. I'm excited for the movie I think it will be epic. Maybe more so then Twilight because let's face it this could reach out to guys as well with the action. 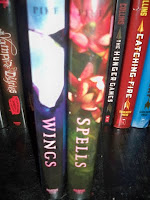 10.) The Wings Series by AprilLynn Pike- This is a 3 book series which if you couldn't tell I'm lacking book 3 which is Illusions. I've read the first one, and I'm debating on whether just to wait and read the second after I buy the third. This is also another Fairy book. I'm starting to see a pattern here with these books. Fairies anyone?
This has probably been the most explained Top Ten Tuesday I've ever done. GO me!
Comment away and I'll try and return the fave.
This has been a top ten production....

Posted by Ashley @ Bookaholics Anonymous at 2:55 AM