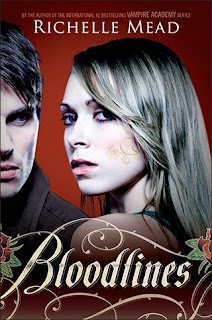 PUBLISHER: Razorbill
PAGES: 421
SERIES/STANDALONE: Book 1
SOURCE: Bought at walmart
OUTLINE:
When alchemist Sydney is ordered into hiding to protect the life of Moroi princess Jill Dragomir, the last place she expects to be sent is a human private school in Palm Springs, California. But at their new school, the drama is only just beginning.

Alright you all know by now that Vampire Academy is like my bible. Okay, not really but it is my favorite series/book. If I could I would make everyone read it regardless if they like that kind of read or not. It will always be one of the books I recommend or in Lan's word pimp it out. So when Richelle mentioned that she was making a spin-off series with some of the same characters from VA I knew that no matter what I would buy it, and read it and love it. You know what? I was right. Did I have a little concern that maybe I would hate it? Maybe like a 1% chance. After all they were characters taking center stage that in VA were only minor characters, and one of my loves for VA were the main characters Rose, Dimitri, Lissa (sometimes), Christian, and Adrian (when he was around).
So question: How could I love a book that didn't feature them, and had Sydney (the alchemist), Jill (Lissa's half-sister), Eddie (guardian), and Adrian as main characters? Not to mention a few new characters as well. (which I will get into in moment) Easy I reminded myself that just because the characters changed that my love for Richelle's writing and story-telling didn't. I also realized that none of the Bloodline characters are going to be VA characters personality wise. I wouldn't want them to be. I wanted to be able to see that they had their own chance to grow as awesome main characters, and be able to shine. I think they proved that they could do that.

BACKGROUND STORY
Sydney is chosen to kind of play big sister to Jill when something happens that forces the Moroi Court and the guardians to send Jill to a boarding school out in California. It sounds like it would be just another job for Sydney, and hey maybe she could make amends for things she did. Boy was she ever wrong. Poor Sydney could never catch a break, and I just wanted her to yell and tell everyone to just stop. Yeah, that's about as much background as you getting from me.


CHARACTERS
Our main character Sydney so I've noticed some people didn't like her as a MC. I had my doubts that she could be a good MC, but I was wrong. I'm going to say this once (maybe) She's definitely not the Rose we all love in VA, but she has her own personality. One that might I add gets her in to sticky situation just like the other. Remember if you will she helped Rose so she has those tendencies to do whatever first then stop and think after. She also wanted to be able to help anyone and everyone she could except for Keith, and maybe Abe. She wanted to protect the people around her even if it meant she had to deal with the vampires and play nice with them. Which for an Alchemist is hard because they're taught  that any vampire whether it was the moroi or Strigoi or Dhampirs they are un-natural. I liked being able to see Sydney grow from the scared, shaky girl at the beginning of the book to someone less afraid and stronger.
First let's talk about the superior which she was suppose to go to if something happened in Palm Springs. Keith the one human person she couldn't stand for reasons not learned until later in the book. She had to play nice in order for him not to sending her packing. I think she did a fairly good job at it, but at some point in time it was like Sydney don't let this dude push you around. So needless to say I'm not a Keith fan.

Adrian, I'm so glad you came back. How I missed your smart-ass comments, and you just being you. As much as it hurt me to see Adrian treated the way he was in VA I think it may help him in this series. I mean yes he's still cocky and arrogant, but when you get farther into the story and see what he's done and who he tries to be he grows on you. I hope he gets what he wants in this series. I wouldn't mind twist with some of the female characters and him. :)

There's more characters I could go on about, but this review is a little on the lengthy side so I'll say this I liked seeing Jill in her own skin, and stand out from her half sisters shadows. Eddie deserves a lot to, and I think he'll grow. Micah, I knew the minute I read his description where that was headed for some other characters. I can only say I hope stuff turns out alright. Lee, I had a hunch that something was wrong with that boy. Oh, and the teacher what is up with her? That is all.


OVERALL
I loved the book, and if you think just because it's a spin-off it might suck. It doesn't really. I think maybe the only complaint I have would be a little more action. I mean with what happened you'd think problems would presents themselves left and right. Not so much. Only small bits. I will say I could have thrown the book for the kind of ending it left me with. One person I wanted to at least see a bit, and the end of the book is where the character shows. I want My Golden Lily now not next year. :(

QUOTES: I think these are one of the few series I  find so many quotes that I love that it's hard to pick. So I have a few.
-Also, I didn't trust any guy who used more styling products then I did. (Sydney)
-I feel like a soccer mom. I'm to young for that. (Sydney)
Soccer moms drive mini vans, and there's nothing wrong with soccer moms. (Keith)
-I named it latte hoping my love of coffee would transfer to the car. (Sydney)
-Crazy people who want to hurt my friends? That is my thing and believe me I know how to deal with it. (Rose)
-At least here I won't corrupt anyone unless it's Clarence and his liquor cabinet. (Adrian)
-Sydney Melbourne? My goodness you don't sound Australian? (Ms. Terwilliger)
Sydney Melrose. (Sydney)

Posted by Ashley @ Bookaholics Anonymous at 1:05 AM