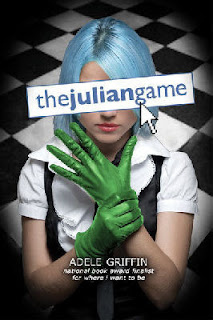 AUTHOR: Adele Griffin
PUBLISHER: Putnam Juvenile
PAGES: 200
SERIES/STAND ALONE: Stand alone
SOURCE: Bought
OUTLINE:
All new girl Raye Archer wants is a way into the in crowd, so when ice-queen Ella Parker picks her to get back at her ex, the gorgeous Julian Kilgarry, Raye is more than game. Even if it means creating a fake Facebook identity so she can learn enough about Julian to sabotage him. It's a fun and dangerous thrill at first, but Raye hadn't counted on falling for Julian herself-and igniting Ella's rage.
As Raye works to reconcile the temptress Elizabeth with her real-life self, Ella serves up her own revenge, creating an online smear campaign of nasty rumors and trashy photographs. Suddenly notorious, Raye has to find a way out of the web of deceit that she's helped to build, and back to the relationships that matter.
MY THOUGHTS:
Since the outline pretty much tells you what the story is about I don't see a need to do that with this book.

In this age of technology we live in it seems that being bullied and being a bully is a lot easier then it use to be. I would say back when I was young, but that was 7 years ago. (I graduated high school in 2004) so it doesn't seem to bad. Still I think that was when Myspace and a few others started popping up giving bullies a new world/way to hurt those they targeted. In reading this book it gave me a different perspective on Facebook. How it can be used to hurt others because like in the story anyone can make a "fake" profile and pretend to be somebody. Which sucks because you'd never know the difference. I love being able to use facebook. It's a great way to stay in touch with family members you don't see often, friends you had back in elementary, middle and high school, previous co-workers, AWESOME BLOGGER FRIENDS, chat friends (this one is a me answer because I've met some awesome people from online chatting back in 99 or so that I otherwise would never be able to talk to since the chatsite shut down.)  I'm totally rambling right now. Sorry!
Back to the review.
I really did enjoy this book it may be a small book compared to many others, but sometimes it's the small books that pack the punch. It shows that just because something may seem like a fun and harmless joke could turn out to be hurtful and well-not-so-fun. As Raye learns just because the rich, popular kids decide to play nice with you for a little while it doesn't mean they won't turn on you if something goes wrong. Then you're stuck wondering how it happened, why did it happen, and a whole bunch of random questions when in reality you should know why. You play with fire you're gonna get burned. Simple as that. She was lucky to have a friend like Tal who was pretty much there regardless of what Raye did. When the time came she was the better friend. I enjoyed Julian as well. He was your typical YA boy even though he went to an all guys school still every girl at the all girl school wanted him. He meets Raye at a party while looking for "Elizabeth", and enjoys her company until some stuff happens. (I'm being vague I know) I think the way it ended kind of made me mad though I was hoping for a different outcome. I guess we can't always get the ending we want.

This book had the Mean Girls feel to it. If you've seen the movie then that's kind of what I was reminded of just instead of a slam book like the movie it was facebook.

I do enjoy Adele's writing though like I said at the beginning her books are usually small books, but they have a heavy meaning. :)
QUOTES:
-It's a one time mistake being born second, but it's got a life time of repercussions. (Ella)
-I know Holy Great Gatsby, Batman Right? (Hannah)