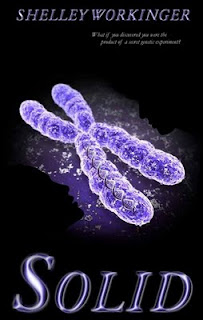 MY THOUGHTS:
I have another new series to love, and what's great is she's not with a big publishing company. She's her own publisher/agent. I've wanted to read this one for quite some time so when Ms. Workinger emailed me to review it I was excited. Now I can't wait to see what happens in the second book "Settling."
If you haven't learned by now I love super powers. I can read most any book with powers, and love it even if the super powers/abilities are the same as other books. The concept/storyline though has to be somewhat different. I guess it's just the idea of being able to do something out of the norm that intrigues me the most. To be able to read minds and really know what someone is thinking, and not be lied to. ( I'm sure it would get annoying at times.) How about invisibility? Move around without being seen...sure why not! Move things without actually having to touch them. You betcha! I know it's impossible, but a girl can still dream right?
On to the story it starts with Calliope, or Clio as she's better known, leaving her town in New Orleans to a school up north. This school is not just any school either it was built by the military for "Special Kids." Kids who are part of an experiment known only as C9x. (Which later gets shut down when the person working on it died.) The school is in place to help the students and the adults involved learn more about how these kids came to be what they are.

Clio's first day she meets others Jack, Garrett, Bliss and Miranda all of whom are different from one another, but become a part of Clio's life at school.
I actually enjoyed each of these characters. Even though they are from different Cliques in the school they realize in order to stop what ever evil is out there they have to do it together. This works well when they were sneaking in somewhere all dressed in black. I thought it was funny.
Jack was the mysterious guy who didn't really have a place at the school he kind of floated from one group to the next. Garrett was the cocky athletic guy, but I grew to love him as well. Bliss was someone I considered to be the girl next door, best friend type. Miranda was the bitchy one, maybe not so much bitchy as snotty. Then again you always have to have that type of mean girl.
As for the evil person (that's what I will them real creative huh?) I actually was shocked to see who it was. I like when I can be surprised. I definitely enjoyed the book, and I'm looking forward to the second book, and whatever comes after.
QUOTES:
-I was used to horribly mangled attempts like cal-ee-oh-pay-a great name for a Spanish rodeo clown. (Clio)
-Waving her gun around, she was obsessed, possessed, all sessed out. (Clio)
-She really was starting to grow on me-in a fungal kind of way, but not posionious at least. (Clio)
-You'd be really screwed if the emergency was a severed hand. (Clio)
-Garrett took the opening to offer me a handful of Lucky Charms saying "Don't worry, I got your back." Actually it was my favorite cereal, but the hand bowl not so much. Are you gonna blow me some milk at your nose too? (Clio)
-I imagined putting together a massive compilation like a soundtrack of my life that I'd be able to listen to and relive all  my memories.
-So first I'm a fox, then a ship, huh? I sure get around. (Clio)
You do? Right on, the guys'll be amped to hear that. (Garrett)
-Well if you know a little about a lot of different things, you have something to talk about with everyone you meet. (Jack)

Posted by Ashley @ Bookaholics Anonymous at 12:22 AM