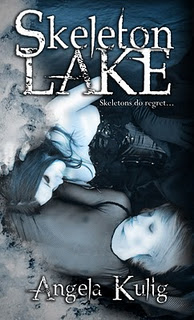 Title: Skeleton Lake
Author: Angela Kulig
ISBN: 978-1937733-03-2
Release Date: October 21st, 2011
Genre: YA paranormal romance
Synopsis: Unsure if she's drowning or being saved, all Marlow wants to do is run away. Ensnared in a haunting love triangle, she realizes both boys have holes in their hearts—scars from loving the same girl, a girl who managed to stay dead. Now she is being hunted for what she has become and what she never asked to be. Even as a Skeleton Marlow isn’t the worst thing in the night—she isn’t even close.
Cover and Summary at Red Iris Books: http://www.redirisbooks.com/p/books.html#sl
Goodreads Page: http://www.goodreads.com/book/show/12668517-skeleton-lake
Author Twitter: @angelakulig
Author Website: http://angelakulig.com/

Characters that Grow; the Flight or Fight Reaction
In middle school, I was a peer mediator. I was a pretentious brown noser until ninth grade when I decided I’d rather wear all black and try my hand at Haiku, before that I’d volunteer for anything. So back to peer mediating--it was not a glorious gig by any means. The kids there had been shoved into it by well meaning administrators at an attempt to avoid explosion. I sat between kids who decided to go at each other across the table; I was shoved, kicked, and spit on. I saw more characters than exist in fiction on a daily basis, but I learned lessons that stuck with me my whole life.
One such lesson was about the Flight or Fight reaction. In a nut shell, it divides people groups based off of how they respond to confrontation.  Do you flee, or do you fight? In school the answer was always FLIGHT, for no reason justifiable or otherwise can you fight in school. In real life though--and subsequently in fiction, we know there are things worth fighting for, and forces worth fighting against. That doesn’t mean that every character has it in them to be the hero, some people can’t even save themselves. Some of them aren’t good people.
I’m a sucker for the long shot from the left field. Have you ever read the book where it’s obvious the nerd with no self-esteem and bad hair is about the save the universe? Those are great and all, but I like the characters that are so flawed, they must undergo some fundamental changes before they can even hope to go there.
In Skeleton Lake mistakes come back to haunt you in ways not even possible in real life, but just as people should grow from their misfortunes so should our fabricated friends. Character growth for me is an essential part in any book, characters must learn from their errors or they are doomed to repeat them. Only just like real life, some of them are more hard headed than the rest.
When I read books I like to group characters in them into Flight and Fighters. I used to think that Fighters made for more interesting books, but as time has marched on I have learned that sometimes the runners will come back and lunge across the table, because sometimes situations break the camel’s back.