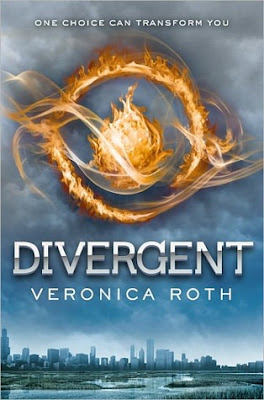 AUTHOR: Veronica Roth
PUBLISHER: HarperCollins Childrens Books
PAGES: 489
SERIES/STAND ALONE: Series (Divergent Book1)
SOURCE: Bought
CHALLENGES: Debut Author
OUTLINE:
Beatrice "Tris" Prior has reached the fateful age of sixteen, the stage at which teenagers in Veronica Roth's dystopian Chicago must select which of five factions to join for life. Each faction represents a virtue: Candor, Abnegation, Dauntless, Amity, and Erudite. To the surprise of herself and her selfless Abnegation family, she chooses Dauntless, the path of courage. Her choice exposes her to the demanding, violent initiation rites of this group, but it also threatens to expose a personal secret that could place in mortal danger.
MY THOUGHTS:

I'm getting so use to the idea of Dystopians lately. I'm finding that I like them the more I read different ones. I use to be kind of on the fence on whether or not I liked them because so many get compared to The Hunger Games, and I wasn't able to enjoy that one so I kind of decided to not read them, but after reading enclave, and now this. I'm almost over the fence to the side of  loving dsytopians. So hopefully, that stays true when I read Matched, Fast-Tracked, Across the Universe, All these things I've done, Those that Wake, The Limit, Wither (which I don't have right now) I guess it's just something about seeing our world altered to the worse possible scenario. I truly loved this book, and can not for wait for Insurgent to come out. There's not to much to say about the world its self that the synopsis doesn't say. It's divided in to 5 factions: Dauntless (brave), Candor (Honesty), Abnegation (selfless), Amity (peaceful), Erudite (Intelligent), and then you have the factionless (homeless).
I loved Veronica Roth's Writing and world-building and characters. I'm telling you I'm in Dystopian Love right now!
The story never seemed to lag, or got tiresome to me. I was always wanting more of it and I wanted to find out what happened next to Tris and Four because let's face it something is bound to happen no? I'm not huge on books that take forever to get started because of explaining and what not, and Divergent definitely delivered on that part it took no time at all for me to understand. It had it's moments where I wanted to cry. You're with these characters on their journey to becoming something, and then it's just gone. -insert ahhh here- I think maybe one thing that bothered me is we never really know what's beyond those fences...what's beyond this post-what not Chicago. Will we learn in the other books. I guess will see.

Characters are always one of my favorite parts of any book because we can easily get attached to them like I said above. If written the right way we feel what they feel. We get to see them grow as people. We get to laugh when they laugh, hurt when they hurt, just feel what they feel, and it's just awesome. I loved Tris at first she started off (like most other main characters) a little awkward and not so sure of who she was, but as soon as she jumped that train I knew we would have a kick-ass heroine. Did she doubt who she was, and who she would become? Yes, but that's part of any good heroine in my opinion. She is right next to my hands down fave Female Herione, Rose of Vampire Academy, and trust me when I say that is a high place to be. :) Four, what can I say about him that hasn't already been said 1000 times plus. He was a great guy. He was a complete mystery for sometime until he opened up and showed us his vulnerable side. He wasn't some crazed-jealous type either. Thank you Veronica for writing him that way. It does get a little annoying to have these hot, but crazy jealous guys with these somewhat insecure females. Caleb, who is Tris' brother we learned a little about him, but not much so I'm interested to see what kind of part he'll have in the next books. The kids who befriended Tris when all the others simply called her Stiff, and thought she wouldn't amount to anything. You guys rock. (even with the little jealousy you had).
Oh, I totally get the cover now to the book. It's definitely a big part of it. :)
I learned so much in this story, yet I feel like I could have learned a lot more so I'm eagerly awaiting Insurgent which is do out in 2012.
QUOTES:
-A fraction of an inch of a mistake, half a second of hesitation, and my life is over.-Tris
-It's easy to be brave when they're not my fears.-Tris

FUN STUFF:
Facebook Fan Page (What Faction are you? I was candor.)
The Divergent Trilogy Site
Waiting on Wed: Insurgent (Book 2)