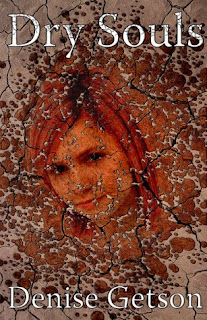 AUTHOR: Denise Getson
PUBLISHER: Cbay books
PAGES: 194
SERIES/STAND ALONE: Series (I think)
SOURCE: Bought
OUTLINE:
Kira has never listened to the rain on the roof, swum in a lake or seen a cloud. All of those things need water, and in Kira's world nearly all of the water has disappeared due to the ecological disasters created generations earlier. What remains is strictly rationed by the government. Kira never doubts this system until the day she discovers a wonderful gift - she can bring forth water merely by touching the ground with her hand. Suddenly Kira dreams of refilling streams, rivers, and lakes and ending the permanent drought afflicting mankind. Unfortunately the government appears to have different ideas. Controlling the water has given them an unprecedented degree of power over the population - power, the government may not want to give back.

This was one of those random books I picked up at HPB not knowing anything about it. The cover intrigued, and when I read the back it did as well. How can anyone not live without water, and on rations? I'm sure all over the world some countries do. I just can't wrap my head around it though. I think another thing that stuck out to me about this particular "dystopian" is that in my mind it's totally possible (except for the girl bringing forth water. I think.) Our world could one day just be wiped clean. I mean what with the pollution, toxic chemicals, and things of that nature. What's not to say it could come to that? It could come to a devastation. This makes me think twice about how we treat our planet. Maybe, it won't in my life time, or in our grand kids life time, but it's a big possibility it could. Sorry, I'm going all green here.


The characters: I thought Kira was a really good main character. Yes, she had her flaws she was un-sure of herself, and sometimes let other people think for her, but I think throughout the story she grew. Her first step to growing was leaving behind all that she knew in the orphanage, and taking a giant leap of faith into the unknown, devastated world beyond her walls of comfort. Was it hard for her? It seemed like it, but she didn't let that stop her. She knew there was something else out there. When she met J.D it seemed things would start to look up. She would have to learn to trust him, a stranger. Sometimes trusting in someone you know is hard, but trusting someone you don't know is even harder. I think for her it worked at really well. They had each others back. Even though I think Kira shared a little to much about herself with J.D while he didn't fully share with her who he was. I think it worked. I grew to like Tamara, baby Shay, and Tuck. So some of the twists in the story had me a little sad. I hate the goverment when they think they can run whatever the hell they want. We did learn from them though that their might be others like Kira out there who have abilities. The downside to that is we never get any more detail on it so I'm hoping that will learn more with a second book.


The ending was definitely not one of those types where your thinking why they hell did it end this way. It left room for another one, or it could be just the one. (Hopefully there's a second though)


So see sometimes just picking random books off the shelves do work.

I think the only problem I have with this is that looking through my bookshelfs I see that it might have some very similar qualities to other books that have gotten a lot more publicity than this one. Which is unfortunate it because like I said it has potential. I haven't yet read those books, but I do have at least two on my shelf so I'll be interested to see if they do share anything in common.