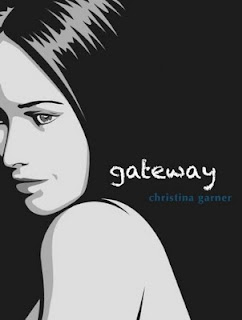 OUTLINE: Ember has always known she doesn't belong in this world. But when she tries to correct the mistake, she wakes to find herself in a mental institution.

She's soon drawn to Taren, the mysterious boy with hazel eyes. He's not what he seems, but what is he?

When chaos erupts, they are forced to flee the institution together, and the secret that Taren has been keeping brings Ember closer to understanding her own. And leads her to... the Gateway
MY THOUGHTS:
First things first I loved this book. When I started reading it I was like okay this sounds like it will be a contemporary book. BOY was I wrong! I mean the first few chapters gave away not a single clue as to what exactly was going on, or what was to come. When that stuff (Yes, I'm going to call it that stuff because you'll have to read it to find out.) happens in the institute I was like damn it I had this book pegged as a different read. Don't get me wrong...I loved that I was wrong. I loved that the story was able to trick me and make that twist.  Most books you're able to figure out what's going on, or it pretty much tells you what kind of book it will be. Not this one. I applaud you on that Ms. Garner. :)


Oh, the characters each one of them had they're differences, and I love when each of the characters can stand on their own not to mention that they are diverse. We're starting to see more and more of that, and I for one love it.


Sorry, this is one of my shorter reviews. I read this a few months back, and I've had things going on since, and I wasn't able to review it right away, but I do remember that I thoroughly enjoyed the book, and if you get a chance to read it. Do it. It's definitely not what it seems. I will probably end up re-reading it again at some point. (I think there's a second coming out, and if that's the case I'll probably re-read it then.)

QUOTES:
He lowered his glasses and read aloud, "Lithium, Clozapine, diazepam...That's quite a lot to ingest. (Doctor)(I think I just liked this because the Pharmacy Tech in me is like wow. I've never even heard of the second one.)


I was Alice falling farther down the rabbit hole. (Ember)


Leave it to me to have a demonic admirer. I wonder what it will get me for Valetines Day. (Ember)
Black Roses? (Taren)
Ugh, I hope not. Who wants the demon presence in their head to be that cliche? (Ember)
Yes, that would be the worst part--the cliche-ness. (Taren)


I'm not eager for a repeat of tonights pants wetting. Nice nothing hotter than a joke about peeing your pants.


See this is why being a lesbian is so much easier. You don't have to deal with men. ()


It didn't matter what people meant, it mattered what they did.