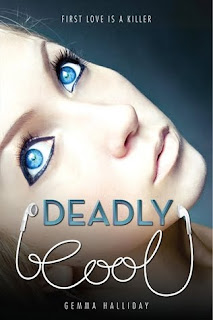 AUTHOR: Gemma Halliday
PUBLISHED: October 1, 2011
PUBLISHER: HarperTeen
PAGES: 320
SERIES/STAND ALONE: Series (Social Suicide Book #2)
SOURCE: Me, Myshelf and I Arc Tour
CHALLENGES: None
OUTLINE:
Hartley Grace Featherstone is having a very bad day. First she finds out that her boyfriend is cheating on her with the president of the Herbert Hoover High School Chastity Club. Then he's pegged as the #1 suspect in a murder. And if that weren't enough, now he's depending on Hartley to clear his name. Seriously? Not cool.

But as much as Hartley wouldn't mind seeing him squirm, she knows he's innocent, and she's the only one who can help him. Along with her best friend, Sam, and the school's resident Bad Boy, Chase, Hartley starts investigating on her own. But as the dead bodies begin to pile up, the mystery deepens, the suspects multiply, and Hartley begins to fear that she may be the killer's next victim.
My thoughts:
First off the cover it's pretty simple yet it says a lot about the story. Especially, the wording as I was looking at the cover more it dawned on me exactly what it was, and it made me laugh. I can't go into detail because of the story itself, but I had to laugh a little at it. Still, I love it and the eyes on the girl. I would love to have bright blue eyes like that.

The story follows Hartley, a girl who just found out her boyfriend was cheating on her with a color guard girl, and when Hartley goes to confront him she gets way more than she bargains for. A dead girl, a boyfriend...err...ex-boyfriend who's a suspect, a mysterious  guy, a killer on the loose, and the drama of high school. Sound interesting?  Actually, for the most part it was a fun read to try and figure out who the killer was, and I have to admit it took me some time to get an idea of who the killer was. After awhile it made sense. I did enjoy the mystery though so it wasn't all bad. The characters were okay. I didn't hate them, but I didn't love them. I think Chase and the best friend were my favorite ones. I don't think I would have been to keen on helping an ex-boyfriend like Hartley was though.

All in all I'm curious to see where the next book goes.