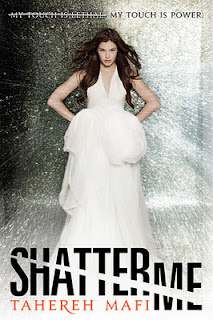 The last time she did, it was an accident, but The Reestablishment locked her up for murder. No one knows why Juliette's touch is fatal. As long as she doesn't hurt anyone else, no one really cares. The world is too busy crumbling to pieces to pay attention to a 17-year-old girl. Diseases are destroying the population, food is hard to find, birds don't fly anymore, and the clouds are the wrong color.

The Reestablishment said their way was the only way to fix things, so they threw Juliette in a cell. Now so many people are dead that the survivors are whispering war-- and The Reestablishment has changed its mind. Maybe Juliette is more than a tortured soul stuffed into a poisonous body. Maybe she's exactly what they need right now.

Juliette has to make a choice: Be a weapon. Or be a warrior.
My thoughts:
I wanted this book from the moment the cover was shown, and I read the synopsis. I love x-men, and Rogue was one of my favorite characters so when people compared this book to those movies and her character I knew it was something I wanted I had to read. For the past month or so it's been out, I'm like I will get it and read it soon so when Amy asked me what I wanted for Christmas it was either this or Mara Dyer. I will say I'm glad she chose this one. I like love the way Tahereh Mafi writes. She has such a beautiful way with words, and the uniqueness with which it was written. I love the way the words and sentences have the strike out through them. It shows us what Juliette wants to say, but keeps to herself. I love the story also. I'm a complete sucker for any story with super powers, anything compared to Xmen I will more than likely love.

Characters:
Juliette is an awesome MC. Strong and determined to do what she believes is right. At times she's a little insecure, but with her parents and others treating her like a recluse because of her curse gift it's understandable. Then enters Adam (OMG) I'm telling you I'm stacking up on these YA crushes. :) Adam is an absolute doll. I can say to much about him without giving things away, but I love him. Seriously. Then you have Warner, a high ranking solider in the re-establishment. As much as I wanted to hate him. (which was a lot.) I still have a little bit of a soft side for him. Even though he's pretty much an ass.Then there's Kenji, who I couldn't figure out. We learn later in the book who he is. :P you have to find out though. Then of course Adams little brother James. Needless to say I pretty much liked liked liked every character. :)

The ending:
I can't say to much about it because I just can't but I'm so ready for the second one now because it threw me for a loop.

If you haven't read this book yet then I HIGHLY recommend it. It deserves every bit of the awesome praise that it's getting.

Posted by Ashley @ Bookaholics Anonymous at 12:20 AM