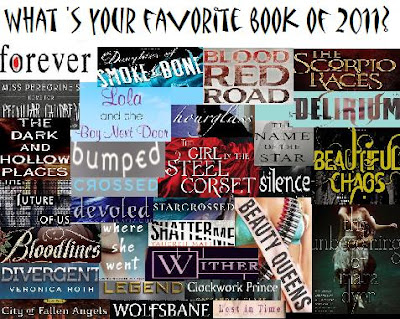 I love my facebook because I always find some of the most interesting things dealing with books while I'm scrolling through it. Once again I came up a poll for your favorite book of 2011 from MTV of course it came though from Bloodlines saying vote for Bloodlines (which I did because well I love Richelle Mead) but I had a hard time because some of my other favorite books were on the list as well like Divergent, Where she went, Shatter Me, Legend. In the end though my love for the VA series triumphed. :)

So my question to you is which books were your favorite in 2011?
You can go vote here at Mtv: Favorite Ya novel of 2011
Is your favorite not on the list? Tell me what it is.

Here's the list they that have going:
The Future of Us' by Jay Asher and Carolyn Mackler  0.05%

Email ThisBlogThis!Share to TwitterShare to FacebookShare to Pinterest
Labels: 2011