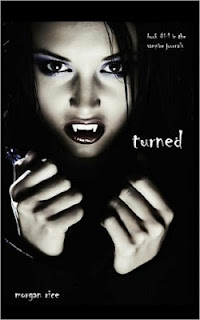 OUTLINE:
Eighteen year old Caitlin Paine finds herself uprooted from her nice suburb and forced to attend a dangerous New York City high school when her Mom moves again. The one ray of light in her new surroundings is Jonah, a new classmate who takes an instant liking to her.

But before their romance can blossom, Caitlin suddenly finds herself changing. She is overcome by a superhuman strength, a sensitivity to light, a desire to feed--by feelings she does not understand. She seeks answers to what’s happening to her, and her cravings lead her to the wrong place at the wrong time. Her eyes are opened to a hidden world, right beneath her feet, thriving underground in New York City. She finds herself caught between two dangerous covens, right in the middle of a vampire war.

MY THOUGHTS:
It's hard to say what I liked about this book really. It's starting to get to the point for me where if it's going to be a vampire story it better have some distinct characters and storyline, or it probably won't stick out in my mind as being any good. Maybe, it was just the timing for me, or I just didn't put much thought into what I was reading at the time. I'll admit I actually read this on my android while spending time at my boyfriends house. That could be another reason. No matter the reason though I wasn't to "OMG I have to finish this now." You could pretty much guess the things that were going to happen, and I didn't care to much for the characters. Even though I wasn't thrilled with it sometime down the road I might end end up reading the others in the series just to see where it goes.

I know this was a bit short, but like I said I didn't enjoy like I wanted to.