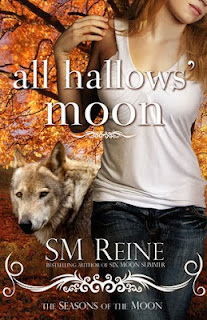 OUTLINE:
Rylie survived becoming a werewolf at great cost. She moves to her aunt’s ranch in the hopes she can enroll in a new high school and quietly continue her life... with a few distinct changes. She transforms into a beast every new and full moon and struggles to control her murderous urges.

Without many werewolves left, it’s hard to stay in hiding. A family of hunters -- Eleanor, Abel, and Seth -- recognize the signs and follow Rylie to her new home. They want to stop her before she murders someone, and the only way to do it is with a silver bullet. Seth soon realizes the werewolf is Rylie, the one monster he failed to kill. Worse yet, he’s still in love with her.

Torn between family and love, Rylie struggles to reconcile her feelings and control the wolf within while Seth fights to do what’s right. But what is right-- obeying desire or duty?

MY THOUGHTS:
I absolutely adore this series. Why it took me so long to read the second book I don't know. Maybe, it's because it was on my kindle and for some reason I have a hard time committing myself to reading things on the kindle. I know that's a stupid reason, but it's true. I'm one of those readers who enjoys the actual book in my hand. I did go ahead and buy the third one on my kindle as well so I would be up to date when the fourth is released this year.

For Rylie living in the city wasn't going to work out after becoming a werewolf so she moves to the country where her aunt lives in hopes that she doesn't attack anyone. Still changing into a beast every new and full moon and controlling that thirst is harder than expected, and things turn up dead. When things turn up dead and it looks like a werewolf is the cause that brings the hunters in town and Rylie is no longer safe and she can no longer hide her secret.

I was really glad that Seth got a bigger part in this book because I adore him. He's not that overly, protective guy. He has a kind heart and I enjoy seeing that in the male characters.
Believe it or not I actually enjoyed Seth's family members as well. Okay, yes they're set on killing Rylie but still I have a soft spot for them....mainly Abel.
Rylie was still an awesome main character and I can't wait to see what happens in the next book which I need to start reading.