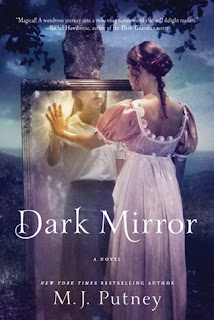 OUTLINE:
Lady Victoria Mansfield, youngest daughter of the earl and countess of Fairmount, is destined for a charmed life. Soon she will be presented during the London season, where she can choose a mate worthy of her status.
Yet Tory has a shameful secret—a secret so powerful that, if exposed, it could strip her of her position and disgrace her family forever. Tory’s blood is tainted . . . by magic.
When a shocking accident forces Tory to demonstrate her despised skill, the secret she’s fought so hard to hide is revealed for all to see. She is immediately exiled to Lackland Abbey, a reform school for young men and women in her position. There she will learn to suppress her deplorable talents and maybe, if she’s one of the lucky ones, be able to return to society.
But Tory’s life is about to change forever. All that she’s ever known or considered important will be challenged. What lies ahead is only the beginning of a strange and wonderful journey into a world where destiny and magic come together, where true love and friendship find her, and where courage and strength of character are the only things that determine a young girl’s worth.


IN MY WORDS
When Lady Victoria has a decision to make that can  ruin her social status and shame her family or save a family members life. She opts to ruin her life and be shamed by her father to save that of her nephews. It's a big price to pay, but she'd rather see her nephew alive. After her secret is revealed her father sends her away to Lackland Abbey in hopes that they can turn her around, and repress the magic in her. At first it seems that it might be possible, but when she meets a group who shows her that there's more to magic she can't deny who she is. Maybe, she was meant for more then just being a Lady.

IN A NUTSHELL
Whenever you can put magic into a storyline, along with time travel that just makes for an even better read in my opinion. I mean it's like sour patch kids: a two for one. First it's sour then it's sweet. Yes, I know odd comparison. I have a bit of a sweet tooth right now. :) I don't read to much historical fiction because it's not really my forte , but for some reason I was browsing through ebooks on my phone, and Dark Mirror was there for 2.99. I always have my phone on me, and figured what better way to read and have something for when I go on break (and don't feel like carrying books around) I mean it's been on my TBR list for sometime anyways. This was a total mistake not because it sucked, but because I couldn't put the darn phone down. (Even though I have the paperback on my shelf) I was mesmerized by the story and characters and I wanted to see what happened with Tori and the Irregulars and the others from the 1900's.

I read in some reviews where they didn't like the time traveling part but I did. If anything that was a highlight in the book for me. Meeting the characters in 1940 and reading about 2 different eras, and seeing them interact with one another was fun for me. Having Tori describe what was different from her time was fascinating. She called the cars...monsters and the airplanes something, I can't remember what. (Sorry I'm use to writing things down and didn't)

CHARACTERS
There were quite a few characters in the story so to name them all and why I liked them would be a bit. Instead, I'll just say that I enjoyed all of them even Cynthia who started off as one of those snobby rich girls.
Tori being the main character I have to say something about I loved her. Even though she was well off and could have been sitting a pretty life had she kept her secret. Still helped her nephew and then being sent to Lackland Abbey she could have left well enough alone and maybe gotten out of there in a year or so, but instead she went with her heart.  I love characters that follow their heart and don't do things to just because it would be easier on them.

Oh, I suppose I should mention the few guys that were involved. It seemed to me like Tori had at least 3 love interests in the story, and for me two of them were worthy and the other one I just didn't care for to much. I don't know if it was because he was so stand-offish at first or what, but he didn't have my heart.

ALL IN ALL
I had high doubts that I wouldn't like this story at all. I try and stay away from the historical fiction even in YA because I feel like half the time I don't understand it, and I hated history when I was in school so why put myself through it. In the end, I'm glad I decided against my prejudices of these types of books because I enjoyed it. It just may have opened up another genre for me. :) I guess you never know what you really like until you've tried it.