Don't Stare at Me Project 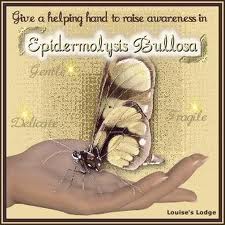 Hey fellow bloggers/readers!
If you've kept up with me these past couple of months then you know I've had some wonderful things happen in my life: my boyfriend, the engagement, getting our own apartment. As awesome as this all is I've learned about things I never would have known about otherwise like epidermolysis bullosa (EB)
Below is just a little insight on what it is and somethings they can deal with.

Having Up to 85% of their body covered in blisters or open wounds.
Wearing bandages all over their body to feel almost safe.
Worrying first thing in the morning that their pajamas are stuck
to their skin.
Fearing bath time, because it can take 3 hours and be very painful.
Being unable to swallow their own saliva.
Losing the use of their hands and feet by the time they are 5.
Battling Cancer when they are only 11.

Having to pay $10,000/month for bandages knowing your insurance
company will only pay $1,500 a year.
Watching your child scream in pain because she is taking a bath.
Bringing your child to an operating room 6 times a year so they can
swallow liquid.

So if you're still with me then continue to read on, and learn why this now has a special place in my heart.

Until a few years ago I had no idea what Eb was, and I'm still learning now. I'd never heard anything about it, I never knew anyone who was diagnosed/born with it. It's not like other disabilities that get enormous amounts of publicity. Like walks, and other things.  Research for anything is always a good thing, and I appreciate everyone who supports things, and takes part in helping. I don't want to sound like I'm knocking any other causes here.  I think what really hit me and prompted me to want to try and help is something that my fiancee said to me a few weeks ago. "Where's the research/funding for my disorder?' That may have not been his exact words, but something along those lines. (It's not that there isn't any research/funding for it...it's that there's not much from what he has told me.) Do you know what it's like to hear those words? It was like he was asking "Why doesn't anyone care about me and the things I go through?" and that hurts.   (Sorry if I come off sounding stupid or rude. That's far from my intentions.) How many of you have actually heard of this before now? How many could tell me what it is without looking at the link above first? It hurts me though to listen to my fiancee when he talks about it. He doesn't do it often, and I try and not bother him about it because he's dealt with people always questioning him and asking about it all his life. That's the last thing I want to do. When we first started dating he would ask me if I had any questions, or why didn't I ever ask him about it. I told him because I didn't want to be one of those people who looked at him differently. I wanted to know who he was beyond just his disability. I think he appreciated that, at least I hope he did.

Now that I know a little more about it through living with him the past few months I would do anything for him because I can see the kind of daily struggles he goes through. Not everyone can see those struggles. So when people say crap I want to tell them "You don't know the half of it." He's a very strong, opinionated person, but even then sometimes shit gets tiring. We both work together so when someone says something to him, or about him when he's not around I stand up for him. Yes, he takes breaks, but that's so he can continue to do his job like everyone else. Sometimes I want to say why don't you take a moment and step in his shoes then you can be a bitch. 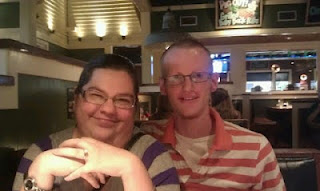 I can't honestly say I know what having EB is like, but I'm trying to understand it, and I want others to understand it too. Not for me but for my Fiancee. I hear the hurt in his voice when he tells me about those people who are afraid to touch him, shake his hand because of the blisters, or just look at him differently. I want people not to be afraid when they see someone who is different because they're just like you and me. They've just been dealt a different hand at life.

Sites to check out:
Debra of America: What is EB?