I miss my blog 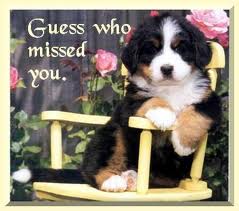 Alright, I know it hasn't actually gone anywhere, and for the most part I haven't either. I've been lazy and just not up to doing much on it. If you look back the past couple of months it kind of shows. The most I've posted in a month is 9 posts, and compared to last year that sucks. Today I was really able to sit down in my "junk" room and think and write some of the posts I have sitting as drafts. Like this discussion one "When is to many...too many?" or some reviews like Dark Mirror and Half-blood. I realized that I miss doing these things and I miss working on my site. I miss the interaction I get to have with everyone. So the next couple of days I'm going to try and put up some reviews that I have sitting in draft form and maybe do a cover reveal post with some covers that have been out and about that I never got to show but think need to be shown.

There's actually one post I have ready to publish, but I'm kind of iffy on it because it's not really book-related. It's more of a personal post dealing with something I think not many people know about, but would really mean the world to me if people would take the time to read. It's dealing with a genetic disorder. Let me know what you think. Should or shouldn't I post it?

Also I was thinking about changing my design again either to something new, or back to the old blue layout I use to have because I actually liked that one. i would like something new and easy on the eyes, but still sticking to the theme of bookaholics anonymous. The whole group around a table with books or something. last time Small Review helped with the banner and I adored it.