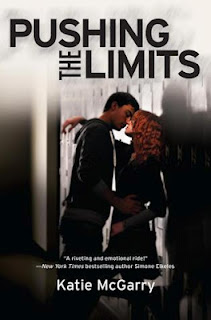 OUTLINE:
So wrong for each other...and yet so right.

No one knows what happened the night Echo Emerson went from popular girl with jock boyfriend to gossiped-about outsider with "freaky" scars on her arms. Even Echo can't remember the whole truth of that horrible night. All she knows is that she wants everything to go back to normal. But when Noah Hutchins, the smoking-hot, girl-using loner in the black leather jacket, explodes into her life with his tough attitude and surprising understanding, Echo's world shifts in ways she could never have imagined. They should have nothing in common. And with the secrets they both keep, being together is pretty much impossible.Yet the crazy attraction between them refuses to go away. And Echo has to ask herself just how far they can push the limits and what she'll risk for the one guy who might teach her how to love again.


IN A NUTSHELL
If you haven't read Pushing the Limits by Katie McGarry yet, it's one that should definitely be on your list to read. From its highs of being well high to the lows of being treated like an outcast, it is an emotional rollercoaster for the reader and the characters.

Pushing the Limits is told in two different POVs. This can either make or break a book for me because it can get a little confusing going back and forth, but I found that in this particular book it helped it. We get to learn so much more about both our characters. They're telling their own stories so it's more personal, and we're not having to learn it from another source. Not only do we get to learn about their separate lives, but we get to ride along as their lives merge together.

"The worst type of crying wasn't the kind everyone could see. No the worst kind happened when your soul wept, and no matter what you did there was no way to comfort it." page 278.

I really enjoyed the writing. There were parts like the quote above that I found to be so true, and it's writing like this that captures you on some level.

CHARACTERS
No one will tell Echo what happened the night she got her scars. Not her father, step-mom, or her new counselor. If she tries to remember her world might just shatter completely. Then comes Noah, the stoner, who might just understand her better then anyone else. I adored Echo's character. Yes, it took her awhile to understand that it doesn't matter what her friends think because if they were truly her friends then they would have been there for her through those darker times. I realize that it's not always that easy to say if you're going to pick and choose when to be my friend then you're not worth it. I mean we're only human right? She eventually stood up to everyone, and said hey this is how it's going to be, and if you don't like it then to bad. I like seeing characters grow, and she did.
Although Noah and Echo were different and had different reasons for being at the counselors office. Sometimes you find friends/loves in the most unexpected places and most unexpected people. I think that's why I enjoyed watching them grow together. Two very different people from different backgrounds come together and try to find happiness. It reminds me of  Ryan and I. We're very different yet we somehow work. :) I enjoyed reading from Noah's POV. He may have been a stoner, but he had so much love for his brothers. I also enjoyed learning about about Noah's friends, and I'm excited that Beth is going to have her own story Dare You Too.

ALL IN ALL
If you haven't gathered from everything above how much I enjoyed the story then there's no hope. :P No, seriously though this is an awesome book, and if you haven't read it then put on your list and try to fit it in somewhere. If you're all washed out from paranormal reads give this one a try. It's definitely a contemporary worth the read.

Here is my list of books I'm wanting to get rid of. I'm willing to give them away, but it would be nice to possibly get a Young adult book I want in return (not necessary though). Remember when I get rid of books I take them to Half price books, and get a little something I in return can buy the books I want.

I have a few others I'll put up later. If you have any question leave me a comment or email me at ashleyjowens@gmail.com with the topic shelf cleaning.

Okay, technically I'm cleaning out the boxes I have that are full of books. Before anyone gets excited most of them are books I bought before I really was into the whole Young adult books. All the books I have are mystery/thrillers, and are more adult books than anything. I figure since I have so many YA book I want to read that I probably won't have time to read the others, and I'm not in the mood for those anymore. It's better to give them to someone who wants to read them then have them sitting in a closet in a box right?
I will try to put up a list a little later on, but I know I have some of Sue Grafftons alphabet books. Anyways if your interested or know someone who is let me know. I'll give it a few, and then I'll probably take them to Half price books.