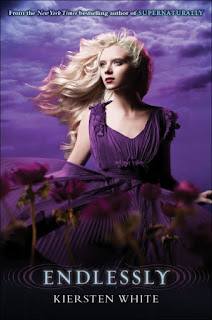 AUTHOR: Kiersten WhitePUBLISHER: HarperTeen PAGES: 385STAND ALONE/SERIES: Book 3 in the paranormalcy seriesSOURCE: boughtOUTLINE:
Evie's paranormal past keeps coming back to haunt her. A new director at the International Paranormal Containment Agency wants to drag her back to headquarters. The Dark Faerie Queen is torturing humans in her poisonous realm. And supernatural creatures keep insisting that Evie is the only one who can save them from a mysterious, perilous fate.

The clock is ticking on the entire paranormal world. And its fate rests solely in Evie's hands.

So much for normal.

I knew When I started this series I would fall in love with the characters, regardless of their sometimes stupid actions. So it's no surprise that I adored Endlessly the third and final installment of the Paranormalcy series.

It was actually a breath of fresh air. I was hoping the brilliance that is Kiersten White would resurface in Endlessly because I was a little let down by Supernaturally. I wanted to get back to laughing at Evie's humor, and see Evie and Lend happy. Not let what they are get in the way. If you love someone you're there for them no matter what. I think it was just the middle book syndrome that series tend to get.

Evie came back with a punch. Her sarcastic yet witty sense of humor was back in action. I fell in love all over again. As with paranormalcy I loved lend to pieces. Everything he did just earned him that much more love.

In the first two books there were a few characters that I actually disliked because of the arrogance and wanting to control everything. If you've read the series then maybe you can guess which ones. One was in book 1 and 2. The other showed up in book 2. Reth was Evies faerie ex who I despised. He only seemed to care when it benefited him. I just wanted Evie to tase him. He did revive himself in Endlessly even with his manipulation he grew on me and in the end I felt connected to him and I hated to see him in the shape he was in, and you could tell Evie felt the same way. The second was Jack who appeared in book 2. Jack was a human who grew up in the faerie realms, and in book 2 tried to get Evie to do some craptastic things. again, his character grew in this book, and I actually started to enjoy his snarky attitude. I especially loved reading his conversations with lend.