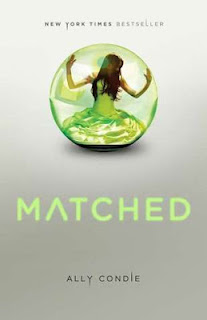 Cassia has always trusted the Society to make the right choices for her: what to read, what to watch, what to believe. So when Xander's face appears on-screen at her Matching ceremony, Cassia knows with complete certainty that he is her ideal mate... until she sees Ky Markham's face flash for an instant before the screen fades to black.

The Society tells her it's a glitch, a rare malfunction, and that she should focus on the happy life she's destined to lead with Xander. But Cassia can't stop thinking about Ky, and as they slowly fall in love, Cassia begins to doubt the Society's infallibility and is faced with an impossible choice: between Xander and Ky, between the only life she's known and a path that no one else has dared to follow

MY THOUGHTS
I've had Matched sitting on my shelf for a bit, and never really gave it any thought. it just didn't seem to have that appeal to me. Now that I've read it, I wish I could say that I should have read it sooner, but truth be told I can't. While there were a few parts where I felt the need to write some passage out so that I could remember it for this review the story itself just didn't hit the OMG level. You know that level right? Where you just can't believe you went that long without it? I can usually overlook the "eh" factor (Eh= I really could care less) I have if either the characters or plot line interest me, but Matched had neither.

I don't want this review to be all negative Nancy. I try not to DNF any book even if it's v.e.r.y s.l.o.w because usually the ending is what keeps you hooked, and maybe that was part of the problem it just seemed to trudge along. I really would have liked it better had I been able to be in Ky's head most the time. He was the only character I truly cared to learn anything about. His story is what was interesting to me. Cassia just seemed like another girl trying to please her society knowing it was wrong. What was up with the society anyways? We hardly learned anything about them in my opinion.

Here's the deal even though I didn't enjoy this book I always try to give them the benefit of the doubt by reading the next book because maybe we'll learn more. Plus, I have a hard time just reading one book in the series if I start it I'm likely going to finish it.

Here are some passages that I did enjoy:

"I thought about Angels." I say.
"Angels?"
"You know. The ones in the old stories. How they can fly to heaven."
"Do you think anyone believes in them anymore?" he asks.
"I don't know. No. Do you?"
"I believe in you." he syas, his voice hushed and almost reverent. "That's more faith than I ever thought I'd have." -Page 273 Cassia and Ky

"There." I say, and he looks at what I've written.
I love you.
Why are some things easier to write than say?
"You don't have to write it back." I say. "I just wanted you to know."
"I don't want to write it back," he tells me. And then he says it, right out there on the Hill, and of all the words I have hidden and saved and treasured, these are the ones I will never forget, the most important ones of all.
"I love you." Page 275


Even if it hurts, I have to tell him. Because either way, whichever life I build, has to be built on truth. page 300

My face fits perfectly into the spot against his shoulder, near his neck, where I can both hear his heart and smell his skin. I'm safe here too. page 315 This reminds me of when I hug Ryan because he's taller then me and I fit into his shoulders as well, and it does feel safe.