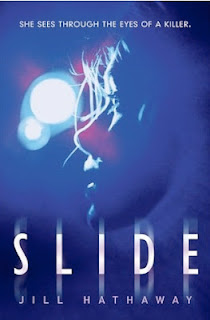 Vee Bell is certain of one irrefutable truth--her sister's friend Sophie didn't kill herself. She was murdered.

Vee knows this because she was there. Everyone believes Vee is narcoleptic, but she doesn't actually fall asleep during these episodes: When she passes out, she slides into somebody else's mind and experiences the world through that person's eyes. She's slid into her sister as she cheated on a math test, into a teacher sneaking a drink before class. She learned the worst about a supposed "friend" when she slid into her during a school dance. But nothing could have prepared Vee for what happens one October night when she slides into the mind of someone holding a bloody knife, standing over Sophie's slashed body.

Vee desperately wishes she could share her secret, but who would believe her? It sounds so crazy that she can't bring herself to tell her best friend, Rollins, let alone the police. Even if she could confide in Rollins, he has been acting distant lately, especially now that she's been spending more time with Zane.

Enmeshed in a terrifying web of secrets, lies, and danger and with no one to turn to, Vee must find a way to unmask the killer before he or she strikes again.

MY THOUGHTS
What would it be like to slide into someones mind and see what they're seeing? To know things about them that no one else does? Well for Vee it's as easy as touching something that a person has an emotional connection too. In some ways I think it would be neat to see what others see. You could actually say I've walked the mile in that persons shoes. Then there's that feeling of  "oh no" invading someones privacy is just wrong. What if you could help find a killer though?


Vee knows that Sophie didn't kill herself, that it was murder, but how do you tell people that when you can't really explain how you know.

So begins the mystery and unraveling of the classic who dun it scenerio. A teacher with a history to hide, a new kid who's too friendly, a best friend who's been distant, backstabbing friends, an ex. I absolutely adore mysteries, before reading YA that was my poison, when I read it was the likes of Mary Higgins Clark. What better way to enjoy a book then to have a mystery wrapped up with a little paranormal twist.


Slide was one of those mysteries where you're thinking it's got to be this person. I mean no one else has "that killer vibe", but then when you find out who it is...it just throws you for a loop. Jill Hathaway did an awesome job at keeping you on your toes, keeping you wanting to know, keeping you guessing. Even with the supposed suicide/ killer on the loose Ms. Hathaway managed to squeeze in a bit of romance between our main character and you guessed it the mysterious new kid.


Definitely can't wait to read the next book Imposter.