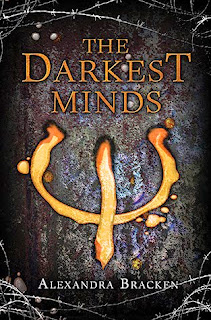 AUTHOR: Alexandra BrackenPUBLISHER: Disney Hyperion
PAGES: 488
STAND ALONE/SERIES: Series
SOURCE: bought
OUTLINE:
When Ruby woke up on her tenth birthday, something about her had changed. Something alarming enough to make her parents lock her in the garage and call the police. Something that gets her sent to Thurmond, a brutal government “rehabilitation camp.” She might have survived the mysterious disease that’s killed most of America’s children, but she and the others have emerged with something far worse: frightening abilities they cannot control.
Now sixteen, Ruby is one of the dangerous ones.
When the truth comes out, Ruby barely escapes Thurmond with her life. Now she’s on the run, desperate to find the one safe haven left for kids like her—East River. She joins a group of kids who escaped their own camp. Liam, their brave leader, is falling hard for Ruby. But no matter how much she aches for him, Ruby can’t risk getting close. Not after what happened to her parents.
When they arrive at East River, nothing is as it seems, least of all its mysterious leader. But there are other forces at work, people who will stop at nothing to use Ruby in their fight against the government. Ruby will be faced with a terrible choice, one that may mean giving up her only chance at a life worth living

MY THOUGHTS:
Have you ever seen the movie PUSH? If not then what I'm saying probably will make no sense to you, but if so then you'll get my drift. When we started learning more about the characters and what they could do I immediately thought of this movie because the main character they're trying to protect from this agency has the ability to control human minds. I say much more then I kind of give away stuff, but let's just say similar.

I am such a POWERS person. By this I mean I love the idea of people having these powers, or unique abilities that defy everything. Mind control, ability to control just about anything. So needless to say when I read the synopsis for this book I was immediately drawn to it. At first it seemed to start off slow, but for the sake of understanding the story I suppose that's ok. I think I really started loving it the moment Ruby and Liam started opening up to each other. I'm such a character reader,and when you can love just about every character in the story that's saying a lot. Liam, Chubs, Zu, Ruby each one of them have that personality that you could grow to love, and I did. Liam for his nurturing and caring ways with the others, Chubs for his love of literature and being that person who all though seems like a complete ass is really just a gooey sweet marshmellow on the inside. Ruby for being that strong, lovable heroine we've come to love from our YA books. Zu for just being that sweet innocent child who believes the world can still be a good place, and that the people in it are seemingly goodhearted.


OMFG!!!! Why? Why Ms. Bracken did you do this to me? Endings like this one bring out so many emotions in me. Sadness, Pissiness (Is that a word?), and more sadness. A few things happened that I really didn't see happening and then some that I figured might, but still I'm not the least be happy about it. Now I'm having to read the second one right now, and usually I'm horrible about reading the second one right after the first, but I wanna see a happy ending for somebody. :(

Quotes:
I had the strangest feeling--like I had lost something without ever really having lost it in the first place---that I wasn't what I once was, and wasn't at all what I was meant to be. -Ruby (pg 203)

We wanted you yesterday, we want you today, and we'll want you tomorrow. There's nothing you can do to change that. -Liam (pg 304)

Posted by Ashley @ Bookaholics Anonymous at 10:46 AM