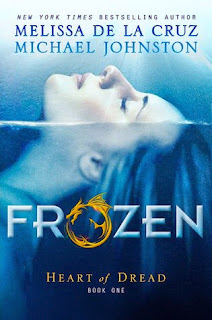 AUTHOR: Melissa De La Cruz and Michael Johnston
PUBLISHER: Putnam Juvenile
PAGES: 336
STAND ALONE/SERIES: Series (Book 1)
SOURCE: bought
OUTLINE:
Welcome to New Vegas, a city once covered in bling, now blanketed in ice. Like much of the destroyed planet, the place knows only one temperature—freezing. But some things never change. The diamond in the ice desert is still a 24-hour hedonistic playground and nothing keeps the crowds away from the casino floors, never mind the rumors about sinister sorcery in its shadows.
At the heart of this city is Natasha Kestal, a young blackjack dealer looking for a way out. Like many, she's heard of a mythical land simply called “the Blue.” They say it’s a paradise, where the sun still shines and the waters are turquoise. More importantly, it’s a place where Nat won’t be persecuted, even if her darkest secret comes to light.

But passage to the Blue is treacherous, if not impossible, and her only shot is to bet on a ragtag crew of mercenaries led by a cocky runner named Ryan Wesson to take her there. Danger and deceit await on every corner, even as Nat and Wes find themselves inexorably drawn to each other. But can true love survive the lies? Fiery hearts collide in this fantastic tale of the evil men do and the awesome power within us all.

THOUGHTS
I've been living in the world of Vampires with this author. I've only read her blue blood books, and none of her other ones like the Witches of East End (I have the first book) I was kind of skeptical going into this one because it's set in a dystopian world where the world is basically covered in ice. I mean I would find it very hard to live in an ice aged world. Regardless, of my love for the cold.

Like the beginning of all new stories (and series) the first book always sets the story up. You learn about the main characters, the new world the author has built, so on and so forth. So it's easy to say that this was really no different. It was slow and it dragged on for awhile. Needless to say at times I wanted to give up because I thought when is something going to happen that gives me that push to want to keep reading. It did happen it's just not instantaneous.

We learned about Nat (I guarantee you'll want to finish the story to find out more about her) and I see this as mostly her story although I wouldn't mind learning more about Wes' life. (Yes, another bookish crush maybe I'm biased when it comes to him though because he has my fiances name Ryan.) as far as the characters go I really enjoyed them. I thought Nat was strong-willed and independent and that's what we need in these stories. I get agitated when the female characters are whiny and seem to lean on others. That's fine if in the end they do some growing up otherwise we're not teaching girls how to be strong and not depend on others. Nat knew what she wanted in the beginning of the story and she went for it even when it looked like things weren't going to end good she kept going. Sometimes persistence is the key.

As for Mr. Ryan Wesson, or Wes as he's better known I adored him. He had this hard shell and this protector like instinct to him from going through things back when he was a solider. There was just something about him that I liked.

Posted by Ashley @ Bookaholics Anonymous at 10:36 AM