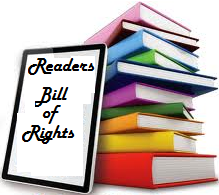 Second, Where the hell have I been lately? I ignore twitter and don't mingle and come back to find some ridiculous sites being made because reviewers/bloggers are being mean or "bullying" authors. I really think that's a two-way street if you look at it really hard.

Authors: If you don't want to be "bullied" by bloggers don't read their reviews, don't show them any interest, don't start something that you can't handle. I mean I would think it's as easy as that. Fact of the matter is if you keep on pushing the buttons, keep on agitating them what'd you expect is going to happen? I know when people push my buttons, piss me off, whatever I stay quite until I've built up so much inside of me that it's going to be released. (or I will ignore you and trust me I've been told that the silent treatment is so much worse via the fiance.) You don't poke at a bear, tiger, or snake expecting it to not attack you, or defend itself do you?  It's common sense when something feels threatened it's only natural to attack. I mean really don't know any other way of putting it.

If I was an author I think I would see a bad review as maybe this is something I need to work on, or hell even like it because they spent their time putting into words how they felt about my book. Yes, maybe it was to bash it, but if it was really that bad why waste another minute on it. I mean not every book is for every person. We're all pretty different which means we're all going to have different taste in books I've gotten some kind of response out of you..negative or positive doesn't matter. I believe that Author Mike Mullin of The Ashfall Trilogy said it best with his blog post "Why bad reviews rock"

Another thing is this ridiculous website that is floating around about stopping the goodread bullies. I won't actually link to it, but if you use your mind I bet you can figure out how to find it. I mean if you think about it the people who made this site are not any better than the people they are supposedly calling out.

That being said, I'm not looking over the fact that bloggers/reviewers may have a part in this drama that's going on, maybe we can find a better way to explain why we don't like a book instead of down right trashing it. Lord knows we really shouldn't start talking crap about the author themselves because there's no reason for it.

Anyways, I for one will always be a goodreads reader. I've tried other sites, and I just can't get into them as much as goodreads.

What about you? What are your thoughts on all of this? Were you like me and had no idea it was going on?