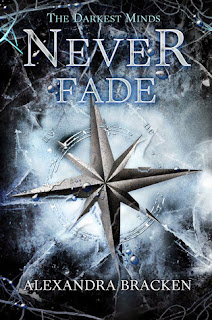 PUBLISHER: Disney Hyperion
PAGES: 512
STAND ALONE/SERIES: Series (The Darkest Minds)
SOURCE: Netgalley
OUTLINE:
Ruby never asked for the abilities that almost cost her her life. Now she must call upon them on a daily basis, leading dangerous missions to bring down a corrupt government and breaking into the minds of her enemies. Other kids in the Children’s League call Ruby “Leader”, but she knows what she really is: a monster.
When Ruby is entrusted with an explosive secret, she must embark on her most dangerous mission yet: leaving the Children’s League behind. Crucial information about the disease that killed most of America’s children—and turned Ruby and the others who lived into feared and hated outcasts—has survived every attempt to destroy it. But the truth is only saved in one place: a flashdrive in the hands of Liam Stewart, the boy Ruby once believed was her future—and who now wouldn’t recognize her.


As Ruby sets out across a desperate, lawless country to find Liam—and answers about the catastrophe that has ripped both her life and America apart—she is torn between old friends and the promise she made to serve the League. Ruby will do anything to protect the people she loves. But what if winning the war means losing herself?

THOUGHTS
OMG!!!! As bloggers/reviewers we've all gone through that second book syndrome. You know where it seems like that book is just a filler until we get to the third book which is usually the epic conclusion. I'm glad to say Never Fade was the total opposite. It stood its ground as pretty epic in itself. This is definitely turning out to be a fave series of mine.

It has the dystopian theme I've come to enjoy, and then the whole powers. POWERS I mean how can a book with this many powers not be totally awesome.

As always Ruby was a kick ass heroine. Well maybe more of a kick "mind" heroine. :) As much as I loved the characters in The Darkest Minds, but I'm glad we got to meet a bunch of newer ones when Ruby decided to go work for the league.

I'll have to say the end of The Darkest Minds nearly killed me. I wanted an ending that would be satisfying, but in a first book I knew that wouldn't happen. I was glad to see there were some loose ends that were tied up in Never Fade.

I know this review is pretty brief, but I can't say much without giving away things. Let's just say that ghosts aren't always dead.

- It was the loved one you saw in the rearview mirror, growing smaller and smaller the more time and distance you put between them until its shape became unrecognizable.
-You can push someones button over and over again to get what you want, but there comes a point when your finger slips and you finally hit the wrong one.