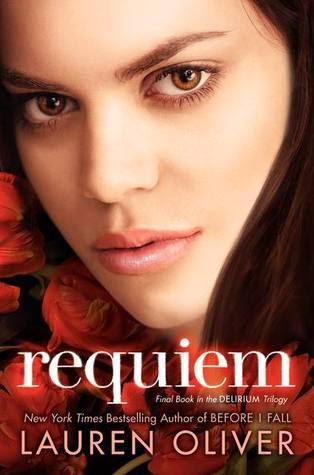 AUTHOR: Lauren Oliver
PUBLISHER: Katherine Tegan
PAGES: 320
STAND ALONE/SERIES: Series (Delirium, Pandemonium)
SOURCE: Bought
OUTLINE:
As her country erupts in open rebellion, Lena fights for the resistance and must make a heartbreaking choice between two loves.
After saving Julian from a death sentence, Lena escapes with him and other members of the resistance. But as she embraces her love for Julian, a boy from her past returns and causes her to question everything.
In the meantime, Lena's best friend, Hana, is engaged to Portland's young mayor and is living a safe, proscribed, loveless life. The story is told from both Lena and Hana's points of view.
As Lena struggles to save the people she loves, everything comes to a head in this exciting finale to Lauren Oliver's epic trilogy. REQUIEM is a sophisticated, wide-ranging novel that explores the large issues of society, government, and resistance, and of course, there is romance.

MY THOUGHTS
An Ashley Quirk
As you read my review you might notice my little hashtags at the ends of some of the paragraphs this is a summary of how I feel. Plus, I kinda like doing them.

Quick Thought
Emotions get the best of me sometimes....okay pretty much all the time, and I'm sure that my husband hates it because fights with me suck. I don't like being yelled at, and if you yell at me chances are I'll crawl into my shell.  Sometimes I think maybe being cured or "Deliria Free" would work in my favor, but then I think emotions like: hate, love, sadness, anger makes us human. #deliriafreeisntreallyfree

PACING
For me I would have enjoyed Requiem more had Lena's chapters been MORE than just walking through the wilds.I got enough of that from the second book. It took them forever to get where they were going, and even though I love learning what's going on I wanted more from the rebellion (see ending) I think Hana's chapters were more fast paced things seemed to always be happening with her. The wedding, meeting other characters, getting into trouble. It was fun to ride along with Hana. #rebellionsrule

CHARACTERS
If I tell you about the characters in this book it kind of gives away what does or doesn't happen in the first two books. Even though the synopsis gives away some clues. If you haven't read the books don't read past Julian. :)

Just know that I loved Lena in the first two books, but this one she seemed different I guess that's what the wilds will do to you.  I wasn't a fan of Julena either (yes you see what I did there) #thewildchangesyou
Like I said above Hana was definitely the character I most enjoyed reading about in Requiem. She seemed to start off on the straight and narrow believing in the cure, and then things started to unravel for her. Who was the mysterious ex-wife of Hanas fiance? Why did she feel the need to help these other people? :) #yougogirl
In Pandemonium, Julian was sheltered, led to believe invalids and those uncured were bad, and when thrown to the wolves (basically) he was skeptical about them, he was more or less a shadow of Lena, but in this book he grew as a character. He played with the big dogs Bram and Tack. He grew a set of balls. He wanted to stand up and help the rebellion, and for that I applaud him. #hegrewapair
Coral was a newcomer to the group of wilders (that's what I'm calling Lena, Julian and them.) She kind of came out of nowhere it seems like to me. So I wasn't to fond of her through the book, and especially not after being so chummy with "a ghost."#girlwhereducomefrom
Even though I wasn't 100 percent a Raven fan things happened that made me feel for her, everything she went through to get where they were only for it to end up like it did sucks, #ravenstrong
We finally get to meet Lenas infamous mom even though we saw a speck of her in book 2 we get to meet her head on in this book, and I'm glad I loved being able to see who she was, why she did what she did, and how Lena and her interact after all the time has passed them by.#infamousannabelle
Ahhhhhh Alex my one and only. You have no idea how happy I was that he was still alive after the ending of Delirium. I always thought Alex and Lena were meant to be instead of Julian and Lena so seeing the way the interacted in the book did hurt a little bit because I know Alex cared for Lena and vice versa. #alextheonetheonly


ENDING
I understand endings that leave a cliffhanger, and all that but those are usually books that have another book coming out in about a year or so. With Requiem I was kind of let down at the ending. Maybe, it's because I enjoyed the story, and I wanted to see more of the characters. It didn't seem to satisfy my need to know more. What happened with the rebellion? With Hana? After reading some reviews about Requiem I see that I'm not the only one that had issues with the ending.  I think Mr. Black says it all!

This is how I felt!