Book Review: Of Monsters and Madness by Jessica Verday 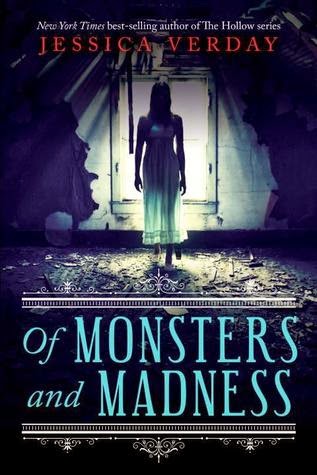 Outline:
A romantic, historical retelling of classic Gothic horror featuring Edgar Allan Poe and his character Annabel Lee, from a New York Times best-selling author.
Summoned to her father's home in 1820's Philadelphia, a girl finds herself in the midst of a rash of gruesome murders in which he might be implicated. She is torn romantically between her father's assistants-one kind and proper, one mysterious and brooding-who share a dark secret and may have more to do with the violent events than they're letting on.

Quick Thought (or not)
First, I must say that I love the cover. It has this creepiness that intrigues me. I mean who is the girl and is that a door she's standing in front of. I mean we could gather from the synopsis itself who the girl might be, but do we really know?

I noticed, while on goodreads, other reviews Of Madness and  Monsters and they were 1 and 2 stars. I personally had no real problems with it. I mean, clearly I enjoyed it because I finished it in a day and a half. I rarely do that unless it's a story I find is worth it, and has something that hooks me in.

This was a Jessica Verday first for me. I have all 3 books in the Hollows Series, and now that I know that  I enjoyed this story by her, I'll probably end up reading the others as well.

It seems I've had nothing but good luck reading books loosely based on Poe and his works.

Pacing
As much as I enjoy a fast paced book this was not one. We were on a ride with Annabel as she moved to this new world, and into a new home that quiet frankly would have frightened a normal lady, but you see Annabel was different. I wasn't at all disappointed with the pacing it fit the book.

Characters
Every character gave a little life to the book.
Annabel Lee was a dear. As I said above she was not much of a lady. Did she try to be? Well of course she did, but because she grew up in Siam, and "wasn't brought up properly" she was a little rough around the edges. Which I thought made her that much more enjoyable. She was helpful, thought for herself, and a true friend.
Maddy the sweet little handmaiden was adorable, and even when she found out Annabel secret she did not cower away.

Ending
Even though the ending is a bit easy to predict that really didn't stop me from wanting to finish it. It was a satisfying ending, and I thought for sure it was a stand alone, but when I went on to netgalley to add my review I noticed in the sidenotes that it has a sequel coming in fall of 2015 titled "The Ballad of Annabel Lee" I have to say I'm a little excited now, just to see how it's done.