Book Review: Stay With Me by J.Lynn 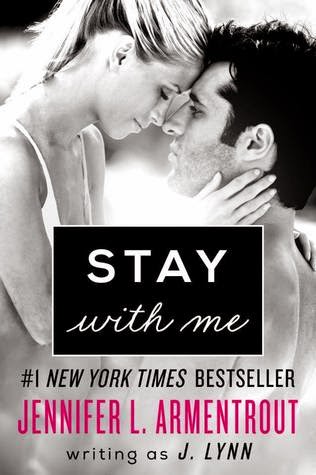 Outline:
At 21, Calla hasn’t done a lot of things. She’s never been kissed, never seen the ocean, never gone to an amusement park. But growing up, she witnessed some things no child ever should. She still carries the physical and emotional scars of living with a strung-out mother, Mona—secrets she keeps from everyone, including her close circle of college friends.
But the safe cocoon Calla has carefully built is shattered when she discovers her mom has stolen her college money and run up a huge credit card debt in her name. Now, Calla has to go back to the small town she thought she'd left behind and clean up her mom’s mess again. Of course, when she arrives at her mother’s bar, Mona is nowhere to be found. Instead, six feet of hotness named Jackson James is pouring drinks and keeping the place humming.
Sexy and intense, Jax is in Calla’s business from the moment they meet, giving her a job and helping her search for Mona. And the way he looks at her makes it clear he wants to get horizontal . . . and maybe something more. Before Calla can let him get close, though, she’s got to deal with the pain of the past—and some very bad guys out to mess her up if she doesn’t give them her mom.

Quick Thought (or not)
Oh, J.Lynn, how I love this series. I think I like this series so much because it reminds me of Katie McGarrys Pushing the Limits books (and I love those books). The Wait for You series is just one of those series you find yourself invested in because the characters aren't perfect. The characters are real, they're flawed, they have problems, and sometimes you see yourself in them. They are characters you can fully relate to. I'm pretty sure throughout the book I was nodding yes to things. Like the quote below. Nick is so much like me when it comes to talking, and I'll try to explain this to people, and they think I'm being a bitch because I don't talk. It's not that at all, I'll say what I have to, and that's that. I'm not a bullshitter (husbands word meaning you can talk about nothing and anything)

"It wasn't that he came across rude. More like the kind of guy who didn't talk unless he had something he wanted to say.- Calla talking about Nick"

I really felt bad for Calla because of what her mother put her through, and although I don't know exactly how that feels I had a friend whose mother did the same thing. Opening up accounts in her daughters name, taking money from her daughter people really are like this and it sucks. I guess the only way to get through something like that is stay calm (easier said then done) and have people around you who care and will help you. Calla definitely had all that, and more. There were people who meant her harm because of her mom, but Calla's family friends never backed down and made sure nothing happened to her. Oh, and those people that did. Jax to name one.