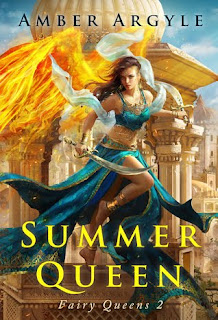 Outline:
Nelay never wanted to be queen. Poised to become the most powerful priestess in Idara, Nelay doesn’t have time to become a pretty bauble for the king. She’s too busy saving her people from the invading army sweeping across her kingdom. But in defeat after defeat, Nelay begins to realize a bigger power is at play than that wielded by mere mortals. Only she can stand between the cinders of her once-great nation and the vengeance of a goddess.

My thoughts
I haven't read anything by Amber Argyle (although I have her Witch Song books on my kindle) so I wasn't sure what to expect, but I enjoyed Summer Queen.
Nelay sets out across the desert from her cushy life with the tribesman to find her family. What they encounter along the way leads to a adventurous and action packed ride.

Nelay was definitely not a wimpy character, and truth be told the goddess in her was awesome. She was strong, brave, and when things looked bleak for her she always found a way to carry on.

Then there's Rycus and his gang of tribesman who I loved. They were all loyal to each other.

The chemistry between Rycus and Nelay was cute, and I loved how it grew.


Giveaway Details: 3 winners will receive the eBook bundle of The Faerie Queen Series.

Posted by Ashley @ Bookaholics Anonymous at 6:59 AM