Book Review: All Fall Down by Ally Carter 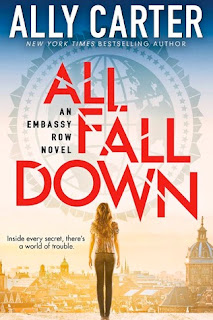 Author: Ally Carter
Publisher: Scholastic
Pages: 320
Series/Standalone: Series
Synopsis:
Grace Blakely is absolutely certain of three things:
1. She is not crazy.
2. Her mother was murdered.
3. Someday she is going to find the killer and make him pay.
As certain as Grace is about these facts, nobody else believes her -- so there's no one she can completely trust. Not her grandfather, a powerful ambassador. Not her new friends, who all live on Embassy Row. Not Alexei, the Russian boy next door, who is keeping his eye on Grace for reasons she neither likes nor understands.
Everybody wants Grace to put on a pretty dress and a pretty smile, blocking out all her unpretty thoughts. But they can't control Grace -- no more than Grace can control what she knows or what she needs to do. Her past has come back to hunt her . . . and if she doesn't stop it, Grace isn't the only one who will get hurt. Because on Embassy Row, the countries of the world stand like dominoes, and one wrong move can make them all fall down.

MY THOUGHTS
Is it wrong to say I love Ally Carter? I don't think there's one book of hers that I didn't enjoy.  That's saying somethin because according to goodreads she's my most read author with 9 books. Nine books! I haven't read that many from Richelle Mead and she's my favorite (or so I thought).

Anyways,  All Fall Down really couldn't of come at a better time for reading because I just finished her Gallagher Girls Series, and was wondering if I would get anymore of her quirky , on the edge, lovable characters like Cammie, Bex, Macey, Liz, Katarina, Hale, or Zach. While they're different stories with different problems they definitely have the Ally Carter-ness to them. :)

We go from Spies, to thieves, to con artists, to a diplomats grand-daughter which I guess could be very similar to the afore mentioned.

All Fall Down has a bit of a dystopian like feel to it. The world in set up differently. I mean you still have the US and other countries, but it's different.

I liked Grace as a character she understood that sometimes you got to fight for what you believe.
I liked that the other kids around her also tried to help her figure out who this person was.

Things happen that you definitely don't see coming (or maybe you're more perceptive then me and do). Either way be ready for for a shock. ;)

The ending was a killer, and I don't know if I can wait for the second book to come out. This...this is why I try and wait to read the first book.