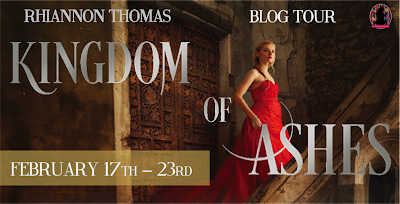 Asleep for a hundred years, awoken by a kiss, Aurora’s life was supposed to be a fairytale. But since discovering that loyalty to the crown and loyalty to her country are two very different things, Aurora knows she can only dream of happily ever after. Once the enchanted princess, savior of her people, she is now branded a traitor.

Aurora is determined to free her home from the king’s tyrannical rule, even if it means traveling across the sea to the kingdom of the handsome and devious Prince Finnegan—someone who seems to know far more about her magic than he should. However, Finnegan’s kingdom has perils of its own, and any help he gives Aurora will come at a price.

As Aurora and Finnegan work together to harness her power—something so fiery and dangerous that is as likely to destroy those close to Aurora as it is to save them—she begins to unravel the mysteries surrounding the curse that was placed on her over a century before…and uncover the truth about the destiny she was always meant to fulfill.

Brimming with captivating fantasy and life-threatening danger, the sequel to A Wicked Thing takes Sleeping Beauty on an adventure unlike any she’s ever had before.

I love the way this story took it's twists and turns from the first one. In A wicked thing, Aurora was more or less spineless. She did most of the things she was told, but I believe she really grew in the story.
Then there was Finnegan who I was to fond of in the first story, but who turned out to be a charcter that I really enjoyed following.

Follow the Kingdom of Ashes by Rhiannon Thomas Blog Tour and don't miss anything! Click on the banner to see the tour schedule.

Rhiannon Thomas is a recent graduate from Princeton University, where she studied English and Japanese, and smuggled bubble tea into the library on a regular basis. She now lives in York, England.

As well as reading and writing YA fiction, she runs the blog FeministFiction.com, where she discusses TV, books, and all kinds of fannish things from a feminist perspective. 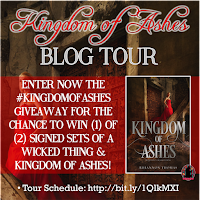 Prize: Win (1) of (2) signed sets of A Wicked Thing and Kingdom of Ashes by Rhiannon Thomas (INT)
a Rafflecopter giveaway
DIRECT LINK: http://www.rafflecopter.com/rafl/display/d9681b86167/?

Posted by Ashley @ Bookaholics Anonymous at 7:00 AM