Book Review: The Truth About Alice by Jennifer Mathieu 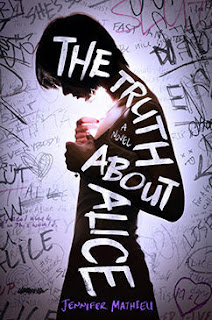 But did you know Alice was sexting Brandon when he crashed his car?

It's true. Ask ANYBODY.
Rumor has it that Alice Franklin is a slut. It's written all over the bathroom stall at Healy High for everyone to see. And after star quarterback Brandon Fitzsimmons dies in a car accident, the rumors start to spiral out of control.
In this remarkable debut novel, four Healy High students—the girl who has the infamous party, the car accident survivor, the former best friend, and the boy next door—tell all they know.
But exactly what is the truth about Alice? In the end there's only one person to ask: Alice herself.

MY THOUGHTS
I thought that since this book was short that it would be an easy read, and things would go smoothly.

After reading it now I wish that could have been true for Alice's sake.

High school will be high school and you will always have the cliques. It takes a strong character to stand out and be different.

SETTING
The Truth About Alice is set in Healy, a small town that you either want to live in forever, or get the hell out of when high school is out. Just like in most small towns everyone knows everybody and their business so it's no surprise to anyone when the town quarterback says he slept with Alice and so did some college guy in the same night. Then the quarterback dies in accident a few days later. Guess who everyone blames? I mean it has to be the last person he was "with" right? So freaking typical!

I grew up in a small town in Texas so I know that feeling of everyone knows everyone. (I can't say it's small anymore though with time comes growth and changes.) I'm not sayin my town ever had these kinds of things happen, but I can imagine how it would be.

I enjoyed the small town feel. I can't say I don't agree with the characters when some want to leave it behind because I felt the same way. You want to get away from what you know, you want to go where no one knows your life story. Maybe, you want to be that little fish in the big sea. I left mine behind, but in the end it's still home.

CHARACTERS
This story is told in 4 and 1/2 POVS. I will explain the 1/2 POV in a moment.
The 4  and 1/2 POVS are basically the main characters. The ones who share their experiences with us.
I will start with the 1/2 POV which is Alice. Alice is the girl that everyone knows to have slept with two boys at a party and then caused the death of one of them. She's the one that takes constant criticism for being a slut, a murderer, a bad friend, and so many more things that as a girl, as a teenager could really  do damage to her. No one wants to be blacklisted by people who are supposedly your friends, to be pushed aside as the black sheep of the town. These are times when a girl, or anybody could use their best friend, but instead this is what Alice's Best Friend is like...
Kelsie's POV is that of a former BF to Alice. I know characters have flaws, but Kelsie is the one character in this story who I couldn't stand, and that's saying something because a few others were ignorant and rude. I would have thought at some point Kelsie would have been like Alice is my BF and this shit talking has got to stop, but no it didn't. Kelsie stayed this selfish, wanting to please the popular group person. She may have thought about talking to Alice, but actions speak louder than words. I get that something bad happened to her, but if you're that ashamed about it, and no one knows think about how someone else feels when you tell everyone about her problems. Kelsie was a bitch--point blank.
Elaine's the queen Bee of Healy High so I didn't expect much from her. I knew she was going to be this girl who would be this stereotypical bitch, and I was right. That's okay though because she has these flaws and that's what makes her. I honestly thought I would hate her from beginning to end, but unlike the supposed best friend of Alice, Elaine grew a small bit true, but even a bit is more than nothing at all.
Kurt was one of the characters you just instantly adore. A typical nerd. He was definitely a sweet, kind-hearted guy. When no one else cared to nice and be nice to Alice..there was dear Kurt.  The one person who knew the truth about Alice. (I didn't even mean to go there with that statement.) It hurt a little inside when things happened later on in the book, but we know that Kurt will not let us down. You keep being your awesome self Kurt.
I think Kelsie and Josh were the two characters I wasn't very fond of for the simple fact that both were cowards in my mind. Kelsie for obvious reasons stated above, and Josh because he led everyone to believe in other rumors surrounding Alice. Maybe, even starting one himself. Own up to your mistakes...man.

END
I also called Alice 1/2 a POV because in the end we get to hear her side of the story we get to see how she feels about situations. She gets the final chapter. The final say.

DOWNFALL
I hated all the slut shaming, and everything these kids did to Alice. The Slut stall...Really? I know it's part of high school, but this is why some many girls and boys have low self-esteem. This is real life and it sucks.

QUOTES
“How much did it hurt? It was like a million paper cuts on my heart.”